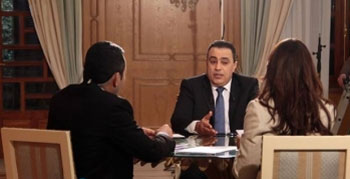 The security situation in the country “is getting better,” assured interim Prime Minister Mehdi Jomaa, citing, in this regard, security preparations made to repel the danger of terrorism through close co-ordination between different security and military units.

In an interview aired Monday on public and private television channels Wataniya 1 and Nessma, Mehdi Jomaa said the state has managed to counter major threats whose authors sought to undermine state institutions, calling on Tunisians to be vigilant when it comes to this phenomenon that can resurface again.

Tunisians who went to fight in Syria are a real threat for the country, he warned, saying the state seeks to develop a strategy to address this issue.

With regard to the neutrality of mosques, Jomaa announced the establishment of a clear plan to take over all mosques, in co-ordination with several departments, including the Ministry of the Interior, announcing the effective start of this plan which, he said, aims to recover 150 mosques beyond the control of the state.

Addressing the issues of leagues for protection of the revolution, Mehdi Jomaa said a distinction has to be made between leagues with legal status but violating the law and those that exist de jure and not de facto.

Regarding the government’s policy in this area, the prime minister said no one is above the law, stressing the need to abide by the law and also respect human rights.

On another hand, Jomaa said the priority of his government is election, insisting on the need to ensure its transparency and integrity,” and setting its date “before the end of 2014.”

He said, in this regard, that his government will work with the independent higher authority for the elections (ISIE) to provide all guarantees and conditions of success to the elections.

With regard to the recent appointment of governors, the prime minister said the choice was made on the basis of competence, neutrality, independence and integrity, adding that “the process of changing delegates and Omdas seems more difficult and will also be made on the basis of skill,”

Speaking of Tunisia’s foreign relations which, he said,” are defined in co-ordination and consultation with the President of the Republic,” Mehdi Jomaa said “Tunisia’s relations with Algeria and Morocco are excellent at all levels.

In this context, Jomaa categorically denied “reports on the establishment of a U.S. military base in southern Tunisia.”