Tunisia and Russia to intensify political cooperation on fighting terrorism 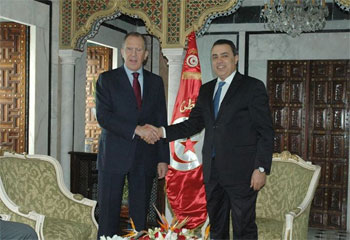 Tunisia and Russia agreed to intensify cooperation in the fight against terrorism and extremism. Moscow and Tunisia share the view on the situations in the Middle East and North Africa, Russian Foreign Minister Sergei Lavrov said after talks with Tunisian President Moncef Marzouki. “We have agreed to intensify political dialogue and to develop trade and economic relations, especially in terms of culture and tourism.

“We share the view on the global state of affairs as well as on the situation in the Middle East and North Africa. We want nations to be able to choose their destiny without drastic changes,” Russian Foreign Minister said. In this regard, the parties agreed to intensify cooperation in the fight against terrorism and extremism. “We have assured that we truly support the Tunisian reforms, related to the adoption of the new Constitution and the preparations for the elections,” Lavrov said.

“Despite the fact that the mutual trade volume in 2013 somewhat dropped and amounted to slightly more than 680 million US dollars, we expect to significantly improve this indicator this year,” the Russian Foreign Ministry noted. “In this connection, the next – fifth session of the bilateral intergovernmental commission on trade-economic and scientific-technical co-operation, whose task is to determine the main vectors for further bilateral co-operation, planned for May in Tunisia, is of special importance.”

According to the Russian Foreign Ministry, “about 300 thousand Russian tourists visited Tunisia in 2013, which is 20 percent more than in 2012.”

“At the same time, our undisputable priority is the security of Russian citizens. We hope that the Tunisian authorities will continue to take all the necessary measures to this end,” the ministry said.

Russia “welcomes the peaceful nature of the transformations undergoing in the Republic of Tunisia through a broad national dialogue.”

“We reaffirm our solidarity with the friendly Tunisian people, our support to the fundamental transformations held in Tunisia,” the Russian Foreign Ministry stressed. “We are ready to assist this process both in the bilateral format and within the framework of collective efforts, including in the context of the implementation of the ‘Deauville Partnership’’programme.”

Tunisia: huge losses incurred by businessmen because of ports