Nadia Chaâbane to Africanmanager: ”Ennahdha and the government are the true heirs of the RCD …” 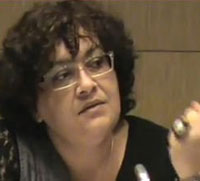 “There are sides that continue to fuel division in society, to manipulate public opinion with false debates ……… “

Nadia Chaâbane, elected member from Al Massar gave an exclusive interview to Africanmanager in which she reveals gaps impeding the progress of work in the National Constituent Assembly (ANC): misunderstandings and improvisation. The NCA member also condemns the violence that is beginning to take hold in Tunisia. She also called to address forthwith to all emergencies facing the country, including debt.

Referring to the new government, Nadia Chaâbane said she does not expect miracle. She added that more than two thirds of the former government members were re-appointed despite their rather questionable balance sheets.

The NCA member has strongly protested against the appointment of Salem Labiedh AS Education Minister, stressing that the latter must win consensus.

What do you think of the functioning of the ANC? Are you really satisfied?

Since November 22, I have asked myself this question every day: How does the ANC operate? Since we had no rules of procedures, I attributed the malfunctions to the absence of these rules but from the time these rules were passed, I can no longer justify it. Convening at the last moment, no planning, a bureau that takes decisions but applies them very rarely, and a parliamentary group finding itself dispossessed of its own decision to choose its representatives in a delegation, for example. Sometimes delegations come together, some elected members are informed and others not. Parameters change according to the groups. Even mails do not always arrive in time, though we have lockers … No written internal communications except for notices of committees and plenary sessions. Everything else is done orally, with all the losses it entails in terms of information and communication. So, there are misunderstandings and misconceptions. I hope that with the recent adoption of the timeline, things will change.

Can we really talk of elections by the end of this year?

Yes and no, if we agree on priorities, yes, otherwise no, and for the moment, things are a little fuzzy. A number of agreements must be concluded for this to be done, and, for the moment, we see no beginnings of any agreement.

Violence is taking hold and there is still no firmness to counter it. All the hard questions are reduced, such as economic issues and emergencies to deal with, the country’s debt, the cost of living, nothing is done to reassure Tunisians and nothing is actually done to move to a

national consensus on the real problems of the country. There are sides that continue to fuel division in society and manipulate the public opinion with false debates…

To what extent can we give credit to the last cabinet reshuffle?

I am really waiting to see if some sovereign ministries entrusted to independent persons will have sufficient latitude to do their jobs. Otherwise and for the rest, I do not expect miracles, as more than two thirds were re-appointed despite their rather questionable balance sheets.

In this reshuffle, there was no willingness on the part of Ennahdha to prioritize the national interest and no desire to embrace an awaited and desired national consensus to actually meet the challenges facing the country. Partisan interest has dominated in the approach to address issues. This party and this government are far from being revolutionary. They reproduce the patterns that we have experienced in a not so distant past. They do not fit at all with the break. They are the true heirs of the RCD. Seeking to get one’s hands on all the institutions when we are in a transition phase means a willingness to settle over time and especially not considering the state as “being in the service of all “but think of it as being subservient to win it, in a total confusion between state and party. It is in this spirit that Tunisia wanted to break with the past and this is what we are seeing. Where is the real change? Nowhere and certainly not in the manner and the speed with which things are done.

I think the excesses which we are currently seeing are dangerous and the laissez-faire which we see is even more dangerous. Impunity is taking hold and the price may be very heavy for the country. It is high time for the country’s leaders to pull together, because what is undone in one day takes several years to be rebuilt. They are perhaps not the victims today, but they will be later. It is in the interest of the country and its stability.

You have repeatedly criticized the appointment of Salem Labiedh as Minister of Education, why?

This ministry must be subject to consensus and the person who should be at the head of this department must be a man or a woman of dialogue and openness. We are very far from this.

Statements made by Habib Ellouz about female excision aroused your anger to the extent that you demanded apology? Can you elaborate on this?

This NCA elected member had insulted all Tunisian women and I’m still waiting for his apology. What he had talked about has never existed in our society and is considered in many countries as a crime against women. Millions of women are broken physically because of this barbarity and they fight every day against this servitude and vile practices. I have known women victims of this mutilation, and keeping silent is tantamount to betrayal in their fight for survival. Accepting the commoditization of these words means becoming accomplice to the crime. Keeping silent means also betraying the oath I took as an elected member. I am at the ANC because Tunisian men and women trusted me and I have to make their voices heard and express their indignation.

When we are elected, we must be responsible, and praising a crime is punishable by law. I am surprised that the ANC and, by that, I mean the presidency of the ANC, has not yet ruled on this issue. It is responsible for enforcing the law and ensuring its compliance, and so far, it has rather kept silent. We cannot accept that a person who will participate in drafting the constitution can speak of a crime as if it was the most ordinary thing. It is indecent, and it is especially reprehensible by law. I have not pushed for a complaint myself, but other women are responsible for doing so, I wait to see how justice will react.