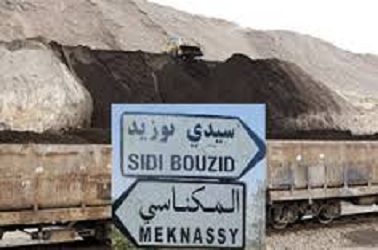 The Ministry of Energy, Mines and Energy Transition, the Gafsa Phosphate Company (CPG), the Tunisian General Labour Union (UGTT) and representatives of the agents of the Meknassi phosphate mine have not reached an agreement on the integration of these agents into the Company, according to a statement by the ministry published Friday on its Facebook page.

This day was also, the occasion to sign the contracts of admitted (in December 2017), in the competition of recruitment of the employees of this mine.

The agents have concluded contracts with a promotion company and not with the CPG, notes the ministry in this statement while stressing its attachment and the company’s commitment to the principle of recruitment through competitive examination.

The intervention of certain public structures (governorate and the Ministry of Vocational Training and Employment) during the signing of contracts does not mean that these agents are part of the CPG, he adds.

The request for the integration of these agents comes after the end of the contract signed between the promotion company and the CPG in the framework of a public contract for the achievement of certain specific services, explains the ministry.

Moreover, the quantities of phosphates to be extracted within the framework of the contract between the CPG and the promotion company must reach 600 thousand tonnes whereas until now only 150 thousand tonnes have been extracted.

Faced with this situation, CPG is called upon to prepare an annexe to the original contract, concerning deadlines, which requires the renewal of the contracts of these agents with the promoter until the extraction of the total quantity of phosphate, towards the end of December 2020. In the meantime, CPG would have the opportunity to set the stages of the project and to identify its short- and long-term needs and thus determine its human resources requirements in the light of the contracts signed with the promoter, according to the Ministry,

It will also be possible to examine the question of strengthening the human resources of the Meknassi phosphate mine when it becomes a production unit under the CPG and thus it will be possible to recruit staff through contests.