HomeInterviewNothing has changed for Tunisian expatriates, according to Tarek Ben Hiba
Interview

Nothing has changed for Tunisian expatriates, according to Tarek Ben Hiba 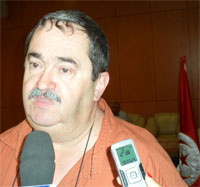 Tarek Ben Hiba, a member of the coordination of the Tunisian Immigration Conference bringing together associations from France, Switzerland and Italy, speaks in an interview with Africanmanager about the concerns of Tunisians abroad and the inaction of the government to them. According to him, the departure of the government is the best scenario to better address the various issues.

What are the current concerns of our expatriates?

The concern of expatriates relative to the current political, economic and security situation in Tunisia remains the primary concern. These are Tunisians who have families living in Tunisia. I think they agree on the incompetence of the government and its inability to provide security.

The second concern relates to the improper services provided to expatriates, including laws that govern them and that have not been changed yet. Worse, they feel they do not receive any attention from the authorities and the government in place. Moreover, they feel that they are still under the Ben Ali‘s regime, that is to say, large rallies, meetings with nothing concrete done except working with friendly associations and others close to the Islamist party.

Houcine Jaziri, current Secretary of State for Immigration, has been subjected to a wave of criticism from immigrants despite his insistence that he has been successful in managing the issue of immigration?

There is a big contradiction. But first, I have nothing against this statesman whom I know and I had defended when he was a political refugee in Paris. It was our duty to defend him.

Personally, I have nothing against him.

On the political level, it is necessary to prove the gains made. Indeed, there is no new law on the immigration policy already enacted. The office of the Tunisians Abroad, a real machine that served the former regime, is in the same process. The solution is to make the office an independent structure with a board of directors including associations and unions. Worse, it continues to work the same way as under the former regime. They also continue to implement bilateral agreements that are disadvantageous and that do not respect Tunisian workers abroad. Tunisia has not yet ratified the international agreement on the protection of migrants and their families from 18 December 1990.

Concretely and with the exception of words, I do not see the gains made for Tunisians abroad.

In this climate of crisis with an Islamist party that still sticks to Ali Laarayedh as Prime Minister, what is the best scenario to get out of the rut and even manage to meet the needs of this population who had suffered greatly under the regime of Ben Ali?

I do not believe that there is a solution with the current government. The best thing for the government to do now is to go quickly, giving way to competent ministers capable of handling major issues such as immigration. This should be done away from the partisan calculations which we see now.

I affirm that democratic associations already support the Salvation Front and its call for the formation of a non-partisan government.

What’s new about the board established for immigrants?

We stick to our proposal hoping that in the new module, there will be benefits for those Tunisians. Foremost, we must reaffirm that Tunisians living abroad are an integral part of the Tunisian people and their political rights must be safeguarded.

As you know, a large number of expatriates with dual nationality are not eligible to apply for the Presidency of the Republic. Why are they excluded from this law? Are they not Tunisians? No need to have several categories of Tunisian, they are Tunisians with the same rights.

This affects thousands of Tunisians living abroad, who are unfortunately excluded from some rights. Perhaps it is symbolic, but it is important for us, and young Tunisian expatriates will forget their country. So the constitution could make a contribution in this direction, knowing that out of the 156 articles, there is no provision relative to immigration or immigrants.

What is your message to the ruling Troika?

I call on it to go quickly enough for us to set up a government capable of managing issues of concern. The crisis is there and how many issues are needed so that this government go?