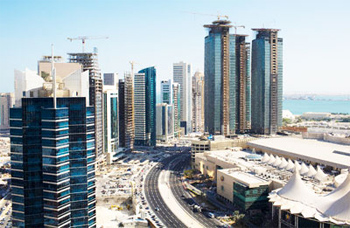 Qatar’s economy accelerated in the first quarter, driven by strong growth in construction, financial services and trade, restaurants and hotels, said a report.

Qatar real GDP growth accelerated to 6.2 per cent in the year to Q1 2014 with the non-hydrocarbon sector expanding by 11.5 per cent owing to rapid progress with the implementation of major projects, according to figures released last week by the Ministry of Development Planning and Statistics (MDPS).

The pickup in growth came despite a 1.2 per cent contraction in hydrocarbon real GDP as a result of falling crude oil production and flat production at LNG facilities.

QNB Group in its report said it expects real GDP growth to continue to pick up during the year as hydrocarbon production stabilizes and non-hydrocarbon growth remains high.

“Overall, the new GDP data are in line with our expectations for real GDP growth of around 6.8 per cent in 2014,” it stated.

“In 2015-16, we expect momentum to continue to gather steam owing to the ongoing implementation of major projects, with growth rising to an average of 7.7 per cent,” the report added.

Strong growth in the non-hydrocarbon sector has been driven by a pickup in major infrastructure investment projects since the middle of 2013. This has led to rapid growth in construction, which expanded by 19.6 per cent in real terms in the year to tyhe first quarter and contributed 2.3 per cent to overall growth.

Rising project activity has also led to a rapid increase in the number of workers being employed in Qatar, pushing up population growth to 11.6 per cent in the year to end-March 2014. In turn, this has helped boost growth in services sectors.

Services contributed 4.2 per cent to total real growth, with sectors such as financial services and trade, restaurants and hotels fairing particularly well, the data said.

With hydrocarbon production expected to continue plateauing in the medium term, the non-hydrocarbon sector is projected to play a more significant part in driving growth in the economy.

A number of major projects are well underway, notably the new metro in Doha, major real estate projects in and around Doha, such as Musheireb in the center of old Doha and Lusail to the North, and new roads, highways as well as a further expansion of the new airport.

Completion of most of these major projects is scheduled from around 2018. The implementation of these projects is, therefore, likely to continue to drive growth, directly through higher investment spending, and indirectly as an increasing number of workers are attracted to work in Qatar.

Based on planned projects, QNB Group expects population growth to average 10.1 per cent in 2014 and we expect it to remain strong going forward to support infrastructure development.

“Such high levels of job growth should boost domestic consumption, supporting the services sector and providing further impetus to non-hydrocarbon GDP growth. We expect growth in the non-hydrocarbon sector to average 11.5 per cent in 2014-16,” he added.

Tunisia: 6.6 MTD for the creation of dates canning factory