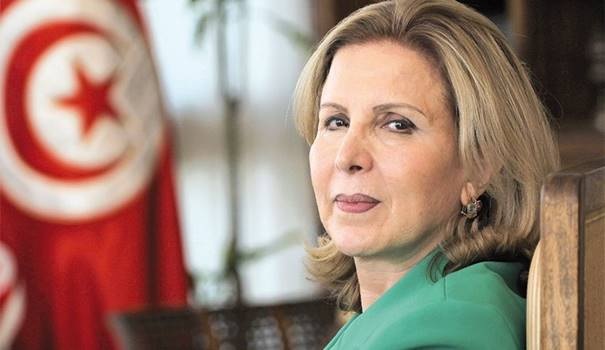 Salma Elloumi, who was recently named president of Nida Tounes, gave this brief interview to Africanmanager.

She talks about her work as re-unifier of the party, its rapprochement with Mohsen Marzouk’s Machrou and contacts with Youssef Chahed’s Tahya Tounes in particular.

She also responds to the results of the latest opinion poll, considered by some as a political earthquake, because of the dramatic ascent of anti-system figure Nabil Karoui.

Now that you are at the head of Nidaa, part of Nidaa, or Nidaa Hammamet, what is the program?

I would first like to clarify something. We held a congress on April 6, 2019 in Monastir. An executive committee with 217 members was elected and accepted by everyone.

This committee had subsequently submitted a list of the political bureau, signed by all sides, including the dissidents who joined the other party.

I will not want to dwell on divisions. We are now talking about a unified Nidaa. Our program is therefore to reunite our party, those who rejected political parties and the entire political class, because of disputes on TV and those who no longer identify themselves with them. We want to moralize politics through the reunification of the different factions, all from Nidaa.

Which ones do you target in particular?

There were important personalities, at the birth of Nidaa, who left. We must recognize our mistakes and reach out to them to put the interest of Tunisia above all

Can you give some names?

For example, Machrou and Mohsen Marzouk who is a founding member, with whom we are already starting a process of unification.

Other national figures, such as Boujemaa Rmili are also involved. We also talk with Tahya Tounes, whom I met with the chief and others.

Did you find an availability for discussion in Tahya Tounes?

Yes. The discussions exist because we are part of the same political family and we are both driven by the national interest and our concern for the situation in our country. We can go beyond it and be operational in the 2019 elections, only by unifying our forces.

Essential question. What place, if any, could have Hafedh Caïed Essebssi in this reunification program of Nidaa?

I do not want to mention names.

We ask this question, because the whole political place in Tunisia agrees on the fact that the problem of Nidaa remains Hafedh Caïed Essebsi

(With an embarrassed smile). I will not answer your question. Hafedh Caïd Essebssi was in Nidaa and is no longer in the current Nidaa. We want to rebuild and avoid destructive attacks and we will call all those who criticize us to join us.

You have certainly read the results of Sigma Conseil’s latest opinion poll. Your party is making a very big decline. What is your comment?

This is the expected result of all the quarrels experienced. We are starting a reunification process and entering a new dynamic. We are therefore strongly convinced that all this will change. Our bases ask us and wonder why this decline compared to 2012, while affirming their attachment to Nidaa.

What is your comment on the voting intentions for the legislative as it appeared in the last opinion poll, where the party of Nabil Karoui is in the first place, while it does not even exist yet?

This is the result of a general disaffection of Tunisian voters with regard to politics, although we consider that this is not completely true, considering the very large number of new registered voters: 1.4 million of which 70% are 18-35 and over 45% of women.

This shows the renewed interest of the Tunisian for politics. If there is rejection, it concerns the current political class that relays on TV and offers no alternative.

This explains the popularity of opinion polls for Nabil Karoui’s party. In 2020, we will need builders, who are there to solve problems and who are listening to deep Tunisia.

And what do you think about the rise of the name of Nabil Karoui in these polls?

I am watching. The rejection of the political class could partly explain it. But perhaps also the fact that he stayed for two years in a situation of proximity, very close to a certain population, whom, I would not say are forgotten, but who has problems that have not been addressed by others.

Is there a possibility of rapprochement with the one who was one of the founders of NidaaTounes?

Currently, we unite and reunite national personalities and parties that are close to us. I cannot comment on Nabil Karoui, it is not yet the moment!

Tunisia: oil exports up, phosphate’s down