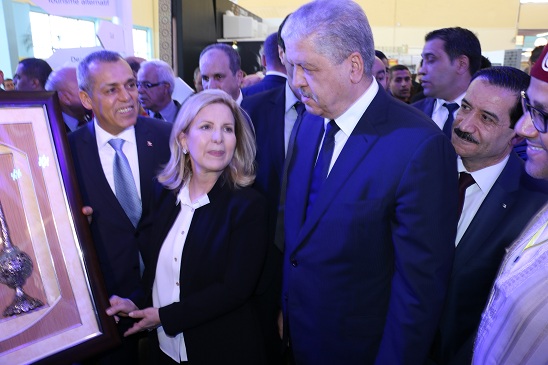 The 16th edition of the International Exhibition of Tourism and Travel (SITEV) Algiers was opened Sunday morning by the Algerian Prime Minister Abdelmalek Sellal, in the presence of members of the Algerian government, Minister of Tourism of Tunisia, Selma Rekik Elloumi and representatives of the diplomatic corps accredited in Algeria.

Under the slogan “Tourism: a sustainable economy”, the show that takes place at the SAFEX Pins Maritimes (Algiers) will continue until Wednesday, May 18

The show is currently recording a record number of participants in the presence of 256 exhibitors from many countries including Iran (first time), Malaysia, Turkey, Morocco, Jordan, Saudi Arabia, Egypt, the United Arab Emirates, France, Greece, Venezuela, Kenya, Spain and of course Tunisia which has earned the lion’s share in terms of participants.

Indeed, of the 250 participants who are taking part in this exhibition, more than 150 exhibitors are Tunisians to reassure and seduce Algerian tourists.

Mindful that this event, which coincides with preparations for the summer season, is an opportunity to promote the Tunisia destination in this sister country, Tunisian officials and tourism operators have travelled en masse as part of a delegation led by Minister of tourism Selma Rekik Elloumi and that sees the presence of Director General of ONTT Abdellatif Hammem, and that of Radhouan Ben Salah and Mohamed Ali Toumi, presidents of the two main professional associations of tourism, namely FTH and FTAV, respectively.

Tunisian participants have gone all out to with a completely new design stands that extends over an area of ​​250 m² where they’re presenting diversified and specialized tourist offers.

This strong participation coincides with the organization in Algeria of a promotional campaign for the Tunisia destination, proving that the Algerian market has become a priority especially with the decline of classical European markets.

This new policy initiated last year was confirmed by the President of the Tunisian Hotels Federation, Radhouane Ben Salah, who considers that this large participation in SITEV demonstrates the importance of the Algerian market, especially that Tunisia is the first destination for Algerians, saying in this regard: “the Algerian market is a big market, and therefore SITEV remains our important appointment. We have long relied on this market, which has experienced a significant growth year on year.