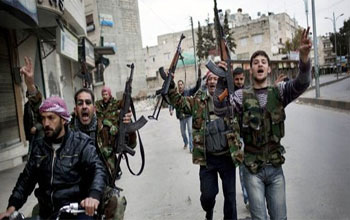 Would Egypt and Saudi Arabia prepare to do the “dirty work” of Americans and Zionists? This is not surprising, the cards are so blurred, and the “achievements” of the regime of Bashar on the ground are shaking both the “3orbanes” of the Gulf and the “Ikhwenes” in Egypt.

They want to forcefully convince their people that this is a war between Sunnis and Shiites. Obviously, they never say that the only winner in this war would be Israel. The fake doctor, Sheikh Med Hassan said in support of his master Morsi that 500 Ulema have declared that Jihad against Bashar is a duty. Obviously, none of his very same Ulema would say there is obligation to fight against Israel for the Holy Land. In this case, the best weapon in the hands of Westerns is the ignorance that is gnawing the Arab world. Indeed, the majority of people believe in everything that the Sheikh says and follow his instructions in a perfectly idolatrous behavior.

If the “3orbanes” declare an official war, they will face two problems: one, they have no argument and anyway, they cannot say they are fighting to establish democracy in Syria. Two they cannot win given the support of Russia, Iran and the Lebanese Hezb Allah in Syria. Though they themselves have the support of the U.S. and Israel, these allies only provide a material support and avoid sending their soldiers; the strategy is to let the Arabs kill each other.

What is left is the solution which involves mobilizing the masses of pretenders to paradise and its inexhaustible virgins, who through a fatwa, become more flexible than butter pastry. Just convince them that the Syrian regime is a tyrant and it is the duty of every Muslim to go to Jihad. And as for the mass, what the Sheikh says is an absolute truth, mobilization will not be difficult. The fatwas of 500 Sheikhs mentioned by Hassene will certainly find positive feedback from the wider fanatic population who still lives on the screenplay of “Arrissala”, the “Messenger” and historical dramas depicting Islam at its peak.

These neo-Zionists show the war as one against the Shiites, explaining it by the intervention of Hezb Allah alongside the Syrian army, but at the same time turning a blind eye to the jihadists from 80 nationalities they themselves dispatched to Syria to make war against the regular army.

These few thousand volunteers would go in Syria to fight the ‘tyrant’ and have an option for a place in heaven with virgins promised, with no military experience, and probably after a few fast workouts. They shall not prevail against the Syrian regime, but will maintain the area in uncertainty, chaos, and anarchy for years and perhaps for decades, to the delight of Israel.