HomeInterviewBCT has done what it can and it has no magic wand,...
Interview

BCT has done what it can and it has no magic wand, according to President of CTVIE 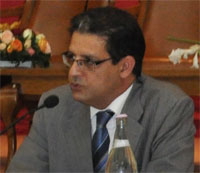 The current economic situation in the country, successive downgrades of Tunisia’s ratings by international agencies, the fall of the dinar compared to the Euro and the agreement on the privileged partner status with the European Union were the major themes of the interview with Walid Belhaj Amor, President of the Centre of Watch and Business Intelligence (CTVIE) within the Arab Institute of Business Leaders.

How can you describe the current economic situation?

The economic situation is difficult, although Tunisia has shown a strong resilience capacity over the past two years, the social context remains precarious and that is a bad sign, two years after a Revolution in which the claims were basically social.

What are the negative indices that most threaten the Tunisian economy?

We must first note that the macro-economic balances are not ensured and that the budget deficit is widening at the same time as the trade deficit. Thereafter, the level of public and private investment remains low and does not allow the creation of jobs at the required level.

Added to this sluggish growth in Europe, which is an aggravating factor for the Tunisian economy based mainly on export.

What is the effect of the fall of the dinar on the Tunisian economy and how can we respond?

At the center of Watch and Business Intelligence, which I chair in the IACE, we had held a few weeks ago, a round table on the issue of governance of the exchange rate. It appears that the exchange rate is an indicator of the health of our economy and its competitiveness in relation to our partners and mainly the Euro area.

When the dinar declines compared with the Euro, it simply means that demand for the Euro is greater than the supply on the market, and our needs to deal with imports in debt service and transfers in generally are higher than our foreign exchange earnings.

The central bank is doing what it should do, or what it can do, but it has no magic wand to change this state of affairs, except perhaps to restrict the importation of certain products, and it may happen if the situation continues to deteriorate. Experts agree that the dinar, despite its current low level, remains overvalued against the Euro.

One can always hope, of course, now I do not think we can consider recovery in 2014, at least for the moment. Domestically, it would require a few prerequisites, including security, the agenda of elections, and the treatment of some important issues, which would restore the confidence of local and foreign investors and thereby engage gradually a virtuous circle where the political, social and economic fields may feed each other. If, in addition, growth recovers in Europe, then we will have objective reasons to be optimistic, but for now, we are far.

You expressed concern about the privileged partner status agreement with the European Union, why?

At the IACE, there are no particular concerns about the privileged partner status itself. Fears are rather related to conditions of negotiating the agreement and risks of being unprepared and not carry all impact studies necessary to evaluate the agreement and be able to make the best of it. What is surprising is that this issue does not appear to be among the priorities of the country, while it appears to us essential especially for the debate it must inspire, the choices that this debate should lead the country to make and the vision of the future that Tunisia could draw.

Now, concerns have been expressed by some political parties and unions. They are understandable, especially if this agreement should take the country in a frantic liberalism without empowering our businesses and our economy to be successful. They would be understandable if this agreement would lead us to unfair power relations. It is up to us, Tunisians, to get more than what is offered, and it is up to us, Tunisians, to do more, at every moment to be stronger tomorrow.

Can you explain this by the absence of Tunisian negotiators or even skills able to negotiate this agreement?

We do not know which team will be in charge of negotiations, and we do not question, a priori, the competence of its members.

What matters is the approach to be adopted, the preparation of these negotiations and the means and resources to be mobilized to provide the necessary elements for negotiation.

What we want in the IACE is that a national debate be launched and provides an opportunity for all sections of the political, economic and social world to speak on the issues raised in Tunisia through this status.

We must be able to turn this EU proposal in a real development opportunity for the country. At the same time, choices must be made by Tunisia in full knowledge of the facts, and not imposed, from either inside or outside. We hope that politicians, but also the civil society will quickly impose a broad debate on this issue.

Which effect the downgrading of the rating of Tunisia by rating agencies has on Tunisia?

Tunisia has entered in this spiral of downgrading of sovereign rating since May 2012 with successive downgrades, demonstrating that confidence in our economy is crumbling. This lowering, if it does not directly affect the state budget, it hits companies whose direct costs in their operations with their foreign partners are directly affected by these downgrades.

We took the initiative, at the Centre for Watch and Business Intelligence at the IACE, to organize, in 2012, after the first downgrading decided by S & P, a round table on the subject and proposed a roadmap suggesting a series of measures that would allow, in our opinion, to stem the loss of competitiveness of our economy. Unfortunately, the same causes bring about the same effects, and because of the lack of action, the situation continues to deteriorate.

What are the economic reforms that are most adaptable to the current economic situation in Tunisia?

I think we need to distinguish between reforms whose effects on the economy are often delayed and the treatment of urgent matters or the implementation of emergency measures that can have immediate positive effects.

However, there are pressing issues, such as resolving conflicts that undermine phosphate mining, or the exploitation of the operating conditions of the port of Rades, which is the core of the economy, directly affecting companies and their competitiveness through the additional costs they face, given the catastrophic performance of the port compared with other ports of the Mediterranean which are much more productive.

We can also mention the informal sector and more specifically the rampant smuggling, which carries a terrible blow to the formal economy and to businesses that meet the rules.

It is not acceptable that the state is not able to maintain healthy and fair conditions of competition to save businesses and the economic fabric in general.

Finally, we have also to mention the issue of debt in the tourism sector that has yet to be set. Moreover, it would be pointless to undertake fundamental reforms, such as investment code or taxation, if there is no respect for the rules of the game for everyone.

Other emergency measures would be likely to boost Tunisian economy, and we will soon publish proposals of the IACE, in this sense.

Tunisia: Why do banks turn their back to SMEs?