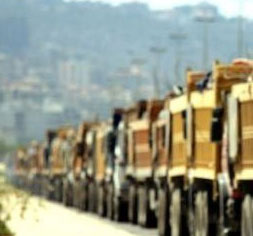 Three years into Syria’s war, some exporters who moved to neighbouring countries to escape the violence that has devastated many businesses now want to return home.

While production in Syria is running at a small fraction of pre-conflict levels, advances by forces of President Bashar Al-Assad against rebels in the past year have improved security in some areas for entrepreneurs who largely lean towards the government side.

On top of this, bosses such as olive oil exporter Antoun Betinjaneh have found that shifting production across the border to Lebanon makes little financial sense.

Betinjaneh, a newly-appointed member of the Syrian Exporters Federation, said that for all the turmoil, the state offered cheaper utilities and land on attractive terms.

“You don’t appreciate what you have until it’s gone,” Betinjaneh told Reuters on the sidelines of a food industry event in Dubai where he was marketing Syrian products.

“It is much more expensive to operate the businesses from abroad. In Lebanon where I went, power and water cost much more than what we were paying in Syria,” Betinjaneh said. “A square metre of land in an industrial complex in Syria is only $16 and is payable over a 10-year period for example, and you have access to all kinds of facilities and cheap energy,” he said.

More than 130,000 people have been killed in the conflict since 2011 and the United Nations says 9.3 million people – nearly half the population – need help. Malnutrition is a growing threat to civilians in Syria, where fighting and sieges have prevented residents in eastern provinces and towns near Damascus from getting food for weeks or even months.

But while marketing food exports as Syria struggles to feed its own population seems more like a dream than a reality, it reflects a strong desire by families who have invested their lives in their businesses to keep them going.

Betinjaneh, who is involved in a range of food trade activities as well as olive oil exporting, rebased his offices to Lebanon but decided against setting up a processing plant there after investigating the possibility.

He has travelled between Beirut and Damascus over a dozen times in the past month. Now he plans to go back permanently to run his business of growing olives in the Damascus region and refining them into oil at a plant in Tartous, a coastal city near the Lebanese border.

Tartous has escaped relatively unscathed from the fighting while Damascus and some government-held suburbs are functioning, although power supplies are patchy.

Before the conflict, the clothing and food industries generated the bulk of Syria’s export business. It was the world’s fourth largest exporter of olive oil producing 250,000 tonnes yearly and exporting around 50 percent of that.

“A lot of that was being exported as crude to Italy and then packaged there and re-exported,” Betinjaneh said.

Now exports have trickled down to negligible amounts.

The conflict has demolished 80 percent of factories and completely wiped out Aleppo’s industrial city. Looting is also a common problem depleting stocks from storage sites.

Olive oil and other food commodities are being shipped out by those looking to make a quick profit. “A lot of commodities, including olives, are now being smuggled across the border to countries like Turkey,” Betinjaneh said.

The Syrian Olive Oil company’s booth at Dubai’s annual Gulfood exhibition this week stood next to several other Syrian companies looking to market their confectionary, nuts and lentils amongst other goods.

Sanctions imposed by the European Union, the US and other countries on Assad’s government do not apply to food, although a freeze on international financial transactions has greatly hindered Syria’s ability to seal import deals for vital goods such as flour, wheat, rice and sugar.

The agricultural sector has also suffered greatly, and Syria faced its worst wheat harvest in three years this season. Estimates collated by Reuters from over a dozen grain officials and local traders in late July suggested the crop was under half the prewar norm.

But even as financial and logistical problems continue to dominate, the head of the exporters federation argues that for some, there is no choice but try to make things work in Syria.

“These people have factories, you can’t just pick up your factory and go,” Mohammed al-Sawah said. “It is a different culture to the trading culture.”

Manufacturers say some areas of Syria have been kept intact and are safe to operate from, including even parts of Homs, whose rebel-held Old City has been devastated.

“Damascus and some of its suburbs are functional and Homs and Tartous were not damaged at all but they had suffered logistical problems because of the difficulty in transport,” Sawah said. “Now the roads are more secure and the highways are open and so the logistics are much better,” he said.

Some of the factories that have re-started operations in the past few months have had to focus on supplying the local market rather than exports due to the shortages. The food business, according to Sawah, is now producing around 15 percent of its pre-war levels.