They set the course, with a partner posting 7% growth 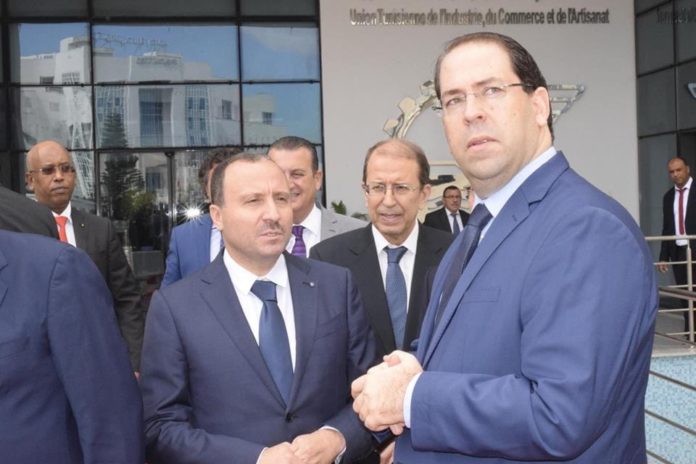 Tunisia, fortunately, awakens to Africa, its natural extension and after which it was named, we have to remember.

Prime Minister Youssef Chahed went there. Though this was not sufficient; he all the same broke with a tradition of lukewarmness about a continent where yet everyone is jostling: China, Turkey, France, Italy, Morocco, Japan and even Germany.

Tunisia is also beginning to play its part, and the little it has done it has done it well, and especially with the speed of execution needed by the delay of several years on the competition.

But the world of business has not waited for the Tunisian executive and diplomacy to get under way, it is already there.

The Tunisian Confederation of Industry, Trade and Handicrafts (UTICA) has made important breakthroughs in Africa, the Confederation of Tunisian Citizen Enterprises (CONECT) too and now the latest, the Tunisia-Africa Business Council (TABC), under the leadership of its president, the indefatigable Bassem Loukil, an “enthusiast” of the continent who does what is needed to pass the virus to decision circles, from here and elsewhere. And it works!

It works so much that the president of Djibouti, Ismaïl Omar Guelleh, was convinced to make an official visit of 3 days to Tunisia during which he initialed a package of agreements.

A business forum was organized on the occasion, on October 04, 2018, an event from which both countries expect many fallout and that is undoubtedly the best argument to attract the Tunisian operators who still hesitate.

Loukil stressed that this case is in fact the epilogue of a dynamic that was triggered a year ago, in September 2017, “a Tunisian delegation composed of representatives of the State and businessmen was received with honors by the Djiboutian authorities and more particularly by His Excellency President Guelleh “, and the latter’s trip to Tunisia is a way of” responding to this invitation.”

The Djiboutian head of state made the trip with heavyweights of his government and “the pinnacle of Djiboutian economy”, which shows his willingness to make of this first big step between the two countries a brilliant economic success, pending the progress that will be made by the joint business council.

“The key to the prosperity of our countries lies in the consolidation and expansion of pan-African relations. This is the mission the TABC has set for itself.

These invaluable resources, it is up to us to exploit them wisely, and redistribute the fruits with foresight and good governance.

The eyes of the world are on us. The greed is exacerbated in a globalized global context where trade intensifies and intertwines exponentially.

In the decisions we make today for our nations, for our continent, lies the future of millions of men and women, the future of our children,” president of TABC said Thursday morning in front of an audience of Djiboutian businessmen who have already touched this reality, since their country is one of the champions of growth in Africa.

In 2017 the GDP was evaluated at 7% by the World Bank; in 2018 it should drop a little, to 6.5%, because of the slowdown in investments and the sluggish recovery of net exports, but thanks to the large investments in ports, other infrastructures and the largest industrial free zone on the continent, an acceleration of the economy is in sight.

Bassem Loukil concluded his address in these terms: “We will have a real opportunity to strategically coordinate our objectives and meet the needs of Djibouti and Tunisia, creating I the meantime wealth, employment and hope for ours.

Scarcely half a century after independence, all lights are green on the path of cooperation between our two countries, and we will not let any obstacle slow down our common race for growth and progress.”

This is a way to invite all these people to join resolutely in a process of regional integration that in turn also laid the foundations with the accession to COMESA, which includes Djibouti, after heading to ECOWAS for which Tunisia has shown a keen interest; and tomorrow African integration with the CFTA. Good, albeit very good steps in perspective…