Tunisia called to capitalize on strategic positioning of Cote d’Ivoire 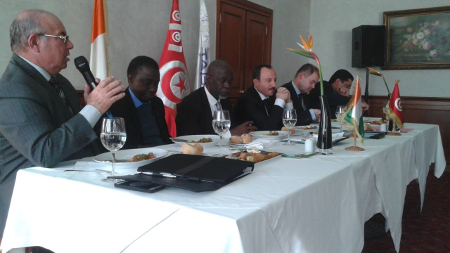 The Tunisia Africa Business Council (TABC) organized a lunch debate, last Wednesday, January 20, the second of its kind, on the theme “business climate, investment opportunities and growth sectors in Cote d’Ivoire”. Ambassador of Côte d’Ivoire to Tunisia, Idrissa Bayo and a representative of the Tunisian Ministry of Foreign Affairs, Imed Torjmane, were among the participants.

Idrissa Bayo said although trade between the two countries has made a net leap forward (from 22.410 billion FCFA, i.e. about 74.7 million Tunisian dinars in 2010 to 30.869 billion FCFA, or approximately 102.9 million Tunisian dinars in 2014), the fact remains that “the level of such exchanges is not yet up to the friendly relations between the two countries and does not meet enough their huge potential and wealth.”

He added: “Even if some challenges remain, despite the efforts being made by both sides, I am for my part convinced that Tunisia and Côte d’Ivoire may mutually capitalize on their collaboration. As regards Côte d’Ivoire, it may draw on the Tunisian know-how to achieve emergence. As for Tunisia, it could benefit from the strategic positioning of Côte d’Ivoire to give a boost to its economy.”

Bassem Loukil, CEO of the Loukil Group and President of TABC, gave a broad overview of the progression margin of Tunisian operators in a country where a growth rate of 8 to 9.8% is expected between 2016 and 2020.

It should be noted that Côte d’Ivoire has posted a real GDP growth of 9.2% on average between 2012 and 2015. The country’s economic takeoff is doped with huge public investment. Indeed, the new 2016-2020 Development Plan will be budgeted up to 29.000 billion CFA francs (EUR 45 billion).

In its strategy of increased penetration of the African market, Côte d’Ivoire can be an ideal bridgehead for Tunisia because of its weight in the West African Economic and Monetary Union (WAEMU), a customs community space of 8 member countries having the same currency (the CFA) and where Côte d’Ivoire produces 40% of GDP. Add to its tenor status in the Economic Community of West African States (ECOWAS), a free trade area composed of 15 member countries.