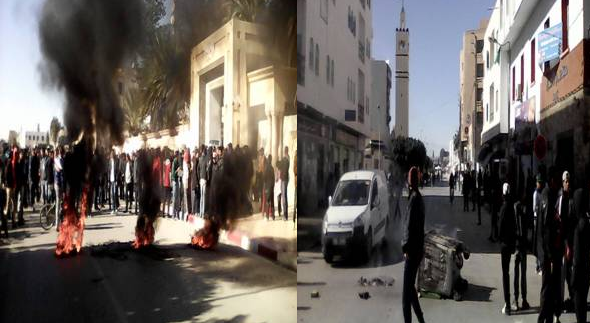 The death by electrocution of an unemployed youth, Ridha Yahyaoui in Kasserine in protest against the withdrawal of his name from a list of recruitment in the public service, set fire to the powder in the region and since Wednesday elsewhere, sparking anger and grief, illustrating the feeling of abandonment of a large part of the population.

This feeling of abandonment, already alive among young people without work or job prospects, is quick to trigger a wave of protests that started Saturday and continues until now to affect several parts of the country.

After an uneasy calm that has lasted a few hours, tension has resurfaced with a remarkable breadth in Kasserine where locals continue to claim their rights.

In Sidi Bouzid, youth of El Meknassi took to the streets where they burnt tires in solidarity with the protesters in Kasserine.

In Gafsa, residents of the delegation of Rdeyef organized a protest march following the increase in unemployment in the region and the deterioration of living conditions.

According to the revelations of the member of the Popular Front (FP) Ammar Amroussia, nearly 14 higher education graduates have been observing for a few days on hunger strike in Gafsa.

Even in Tunis, another march was organized by a large number of citizens.

This taut and restless climate forced the government to react by deciding the dismissal of the first delegate of the Kasserine region and the opening of a full investigation on the list of recruits among young people who had protested in 2014 to demand jobs.

Yet it is still insufficient and the authorities in place have been late to react, according to many observers. The regional labor union in Kasserine for example said that this government has not kept its promises on the implementation of development projects in that region.

Moreover, protest movements are spontaneous, peaceful and conducted by young unemployed, it says, holding the government the primary or even sole responsible for the unfolding of events, because it argues, “it did not allocate the necessary budget to tackle the challenges, faced including employment and development,” noted Secretary General of the UGTT’s URT in Kasserine, Amor Mhamdi.

Towards a new revolution…

Despite government attempts to find a solution to this crisis by organizing a visit of a parliamentary delegation in Kasserine, much remains to be done especially as a second revolution is increasingly likely.

This is what MP Ammar Amroussia believes. He said: “the situation has not improved with uninterrupted movements and with a government that is still unable to redress an economy where growth hardly manages to reduce the thorny problem of unemployment.”

Everything is possible, academic and economist Moez Labidi said on his part. Because it is difficult to undertake reforms in regions in a climate characterized by partisan bickering and a debt-ridden countries, however, calling for launching structural reforms.