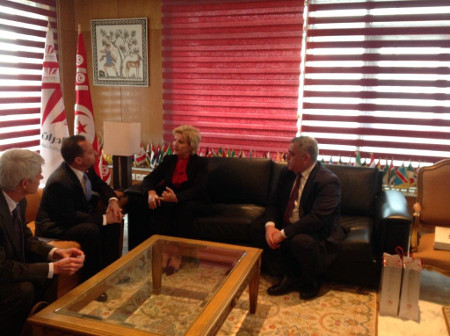 As part of the monitoring of the Tunisian-US cooperation program “Export Coaching” on the German market, the Export Promotion Center (CEPE), on Tuesday held, in collaboration with the Ministry of Commerce, the business reform and competitiveness program (USAID Tunisia) and PRAGMA corporation, a “coaching workshop” in preparation for the Mission to be held in April 2016 in Germany for Tunisian textile and clothing companies (30).

Led by expert in technical textiles Sven Eriskat, the workshop was attended by Daniel Rubinstein Ambassador of the United States to Tunisian Aziza Htira, CEO of CEPEX, Saida Hachicha, Director General of Economic Cooperation and trade, Ministry of commerce and Amel Mankaï, expert at the US Agency for International Development (USAID).

The initiative forms part of the Tunisian-American Cooperation project “Business Reform and Competitiveness Project” (BRCP) funded by the US Agency for International Development (USAID) to assist Tunisian SMEs in the textiles and clothing sector to strengthen their position in the German market.

Tunisia: cumulated tourist receipts down 22% at end of April

Egypt signs on to biggest free trade bloc in Africa