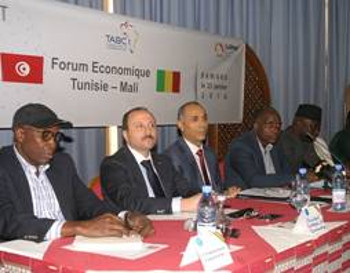 A Tunisian economic mission is currently in Mali, while another prepares to set sail for Sudan. Tunisia, or at least the private sector, finally decides to head off to Africa, land of all business opportunities in almost all areas.

This high interest compensates for the denial, so far, of this truth by Tunisian authorities.

Politicians, who go as far as beat pavement of European and Gulf countries in a race to financial support, forget that only wealth could drain its equal and wealth begins at home, first.

As such, a Tunisian multi-sector prospecting mission in Mali began on Monday January 25 and will continue until Thursday, January 28, 2016. The mission is organized by the Tunisia-Africa Business Council, in collaboration with its partners (CONECT International and UPMI) and with the support of the Tunisian Embassy in Bamako.

Besides the Minister of Investment Promotion and Private Sector, Mamadou Gaoussou Diarra, the ceremony was attended by five other Malian ministers, namely the Ministers of Trade, Industry and Mines, Tourism and Culture, Justice and Education.

“Win-Win” Partnership with Africa, according to Bassam Loukil

The first day of the event saw the participation of a hundred Malian business managers and the President of the Chamber of Commerce and Industry of Mali, Bathily Youssouf, President of Mali’s Employers Organization, as well as the ambassadors of both countries.

During this event, president of TABC, Bassem Loukil said the aim of the mission is to have a clear idea of the opportunities offered by the Malian economy, and what are the key areas for development. “I would like, on the other hand, to point out that despite the economic challenges, Tunisian companies, which are very well represented during this mission, are very confident about the potential of Mali’s economy, as well as potential opportunities of investment and trade in the near future.”

Loukil noted: “our companies are willing to share their technical expertise, their ability to direct, integrate and contribute with local and international partners to develop the projects planned for the future as part of a real win-win partnership.

A business forum was also held in the afternoon of Monday, January 25, 2016. It was chaired by the Minister of Investment Promotion and Private Sector and the Minister of Trade and Industry of Mali. Tuesday, January 27 was dedicated to B2B meetings between Tunisian and Malian companies participating in the Forum.

On the other hand, it is a Tunisian business delegation that is participating in the Khartoum International Fair, held from January 24 to 27, 2016, in Sudan.

The delegation is composed of more than 75 Tunisian companies operating in several sectors (health, food, pharmaceuticals …) will have a series of meetings with Sudanese businessmen and field visits are also on the program.

Similarly, a stand of 66 square meters will be dedicated to 9 companies in the International Fair of Khartoum.

The mission is organized by the Exports Promotion Centre (CEPEX), in collaboration with the Tunisian Confederation of Industry, Trade and Handicrafts (UTICA) and the Embassy of Sudan in Tunis.