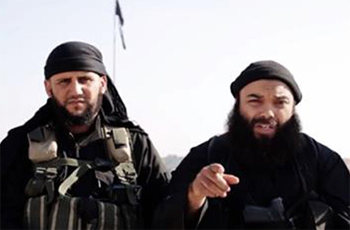 The organization of the Islamic Sate, Daesh announced, Wednesday, its rejection of the elections in Tunisia, threatening to launch bloody attacks during the presidential election.

In a video recording, Daesh also claimed responsibility for the assassination of Chokri Belaid and Mohamed Brahmi.

The choice of timing is expected

The timing was well chosen, Jomaa Guesmi, political expert told “Africanmanager,” stressing that these terrorist groups aim to disrupt this historic event. “The choice of timing is not surprising as these groups continue to foment terrorist projects in order to derail the electoral process and accordingly the final phase of the transition,” he added, calling all parties to take seriously any threat made by these groups.

He was also quite dubious as to the claim by Daesh of its responsibility in the assassination of Chokri Belaid and Mohamed Brahmi. For, this group emerged only in February 2014 while the murder of the two martyrs was perpetrated in 2013, not to mention that investigations are still continuing.

For his part, expert in strategic security, Ali Zeramdini said the video released Wednesday by Daesh is in line with the doctrine of extremist groups that suffered setbacks. “This video has everything of a natural reaction on the part of terrorist groups following the blows that were dealt to them by the security and military institution that continues to win considerable success in its fight against terrorism,” noted Zeramdini in a statement to “Africanmanager.”

The positive results recorded by our security units have greatly affected the performance and effectiveness of these groups increasingly overcome by disappointment and much demoralized. Therefore, the use of media propaganda was the only way to “raise the morale” of terrorists of this group, he added.

This is why vigilance is particularly urgent in the current phase because extremists are working to create disorder, added the expert in strategic security, stating that these groups foment acts likely to surprise in such situation.

“Our forces are expected to observe the same level of vigilance during this period but also after polling day, considered more important for everyone,” advised Zeramdini before explaining that terrorist cells certainly want to benefit of every second of the relaxation of our security agents.

Infiltration from Daesh is possible, but…

He also ruled out a possible “bloody” attack on polling day, in view of the spirit of the people and especially thanks a better security strategy where agents have recovered their usual pace. “Though, these groups have, certainly, failed, the situation at the regional level commands us to be more cautious,” said Ali Zeramdini who excluded any infiltration of fighters from the Islamic State to the Tunisian territory because of the deteriorating security situation in Libya. “Such infiltration is possible, but the execution of an attack is difficult in a country known for its institutions.”

The ISIE by the voice of Nabil Baffoune assured us that such threats will have no impact on the polling day and more precisely on voters. Preparations are underway in preparation for the holding of the presidential runoff. “We have taken every precaution to make things happen in a proper manner as was the case for the first round of the presidential election and the legislative poll,” he has said.

Nabil Baffoune also stated that adequate measures have been taken for all polling stations especially for those at the borders. Indeed, 124 polling stations will be open on Sunday from 10:00 to 15:00 in border regions.

This position was shared by the Ministry of the Interior which, he said, was willing to deal with various attempts of destabilization and ensure the success of the presidential election.

More than 60,000 security officers and 36,000 soldiers will ensure the smooth running of the second round of the presidential election on polling day.