Tunisia: decline in exports of dates 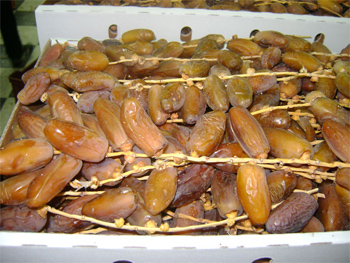 “Exports of dates reached 8685.8 tons, until November 9, 2015, generating revenues estimated at 35.4 million Tunisian dinars (MTD) against 8922.4 tonnes and revenues of 42.8 MTD during the same period of 2014, according to the Ministry of Agriculture.
Tunisian dates are mainly exported this year to Italy (1980.4 tons), France (1,025.6 tons) and Morocco (989.2 tons).
According to the Department of Agriculture, dates production is estimated to 246,000 tons in 2015.
This year, producers of dates in southern Tunisia have repeatedly protested against the problems encountered during the dates picking season. They find it difficult to sell their productions.
They, especially, denounced the practices of certain exporters of dates to force farmers to undercut prices.
However, various stakeholders in the sector have agreed on prices, at a meeting held at the Ministry of Agriculture, last October.
The Inter-professional fruit group (GIFruits), on Saturday, began to purchase dates picked by small producers in the governorate of Kebili.
Share
Facebook
Twitter
Linkedin
Email
WhatsApp
Viber
Pinterest
ReddIt
Tumblr
Telegram
Digg
Mix
Print
Previous articleTunisia: French brand KIABI to open first store in Soukra
Next articleDisconnect between perceived and actual resilience threatens reputation of companies

Tunisia: A set of measures in favour of Tunisian economy and...