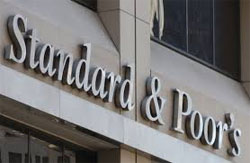 A delegation from the international rating agency “Standard & Poor’s” focused, at a meeting held recently with Minister of Finance, Elyes Fakhfakh, on the progress of the implementation of the budget in the first months of the year 2013, the balance of public finances and the amount of debt expected for the current year.

According to a statement released Monday by the Ministry of Finance, the delegation asked about the state’s compensation strategy, the financial situation of public corporations, the new investment incentive system, the roadmap to be adopted for the coming period and milestones necessary to complete the transition to democracy.

Mr. Fakhfakh said the growth rate in 2012 and the first months of 2013 was positive, indicating that efforts are directed at present to control the financial balance and limit the budget deficit rate to 5.9%, while ensuring progressively reducing the rate of debt from 46.5% in 2013 to 42% in 2017.

In the context of tax reforms, the government will create six committees that will focus on the development of an outline of the reform to be submitted next October, to a wider national consultation, he said.

The minister also spoke of the process of comprehensive audit of public banks which is part of the reform of the banking system, in addition to the reform of the investment incentives and compensation systems, insisting on the imperative of participation of all stakeholders in the reforms.

According to Mr. Fakhfakh the task assigned to members of the Constituent Assembly in drafting the constitution was originally behind the delay recorded in the enactment of several pieces of legislation, including the texts governing the operation of financing the budget by Islamic Sukuk (bonds).

He said that the government has agreed with the International Monetary Fund (IMF) on the possibility of using the Stand-By Arrangement approved recently to overcome the lack of funding due to delays in issuance of Islamic Sukuk.

Regarding the political agenda, the minister believed that the vision begins to be clearer, following the announcement of the completion of drafting of the final version of the new constitution, in addition to the establishment of Independent national bodies of information, justice and election and preparations started for the development of the electoral law.