HomeFeatured NewsTunisia-Elections: ''All is for the best in the best,'' according to the...
Featured News

Tunisia-Elections: ”All is for the best in the best,” according to the President of the ISIE 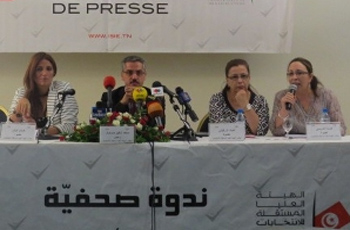 The President of the Independent Higher Authority for the Elections (ISIE), Shafik Sarsar wants to be more optimistic than ever. At a press conference held on Thursday in Tunis, he welcomed the progress made by the election body.

During this press conference dedicated mainly to the launch of the second phase of voter registration which will start from August 5 to 26, 2014, Shafik Sarsar noted the “unexpected increase of about 63% in the number of young people registered to vote and whose age varied between 18 and 40 years, “adding that the rate was not recorded during the 2011 elections, organized by Kamel Jendoubi (former president of ISIE).

He said, moreover, that 147,497 voters have registered during the additional week decided in a bid to allow latecomers to register, noting an equality between the number of men and women who have registered to vote, something that had not be achieved in the 2011 elections, he claimed.

He also noted that the ISIE has used new technologies such as registering at home, unlike the old one.

However, Shafik Sarsar said 548,000 Tunisians among those who voted in the October 2011 elections have not yet registered to vote, seeing in that one of the reasons for the launch of the second phase of the voter registration well as Tunisian expatriates, students who do not yet know their place of employment, young people who are waiting to obtain a national identity card, and those who turn 18 on the day of the election.

It should be noted, however, that voters will register in this second phase will only have the right to vote and not to be candidate for the next presidential and legislative elections.

Regarding the second voter registration phase, the president of the ISIE said that this period will span from 5 to 26 August 2014, noting that so far 761,463 voters have registered in the electoral roll, with the total number of voluntarily registered voters reaching 5,127,000.

He also said that 27,047 voters registered during the second day of Eid El-Fitr and 9,000 others, on the first day.

During the extra week added 147,497 voters were registered. It should be recalled in this connection that the voter registration deadlines were extended by one week to allow latecomers to register in order to vote in the forthcoming presidential and legislative elections scheduled for the end of the year.

Shafik Sarsar admitted, however, that the ISIE faces several difficulties. Among these challenges, he noted that 30 people found their names recorded in the list of dead while they are alive.

In addition, Shafik Sarsar said 100,000 passports need an update, noting, however, that the ISIE, in collaboration with the departments concerned, has managed to update fifty passports.

On another aspect, spokesman and member of the ISIE, Kamel Toujani ruled out the possibility to postpone the elections, describing it as “very serious” and threatening the country. “We have to hold the elections as planned regardless of the consequences,” he said.

For her part, Faouzia Idrissi, member of the ISIE noted the reluctance of women in interior regions to register for the elections, adding that many of them do not even have identity cards. Consultations are underway with the Ministry of Interior, Women and departments concerned to provide identity cards to these women in the short time, she said.