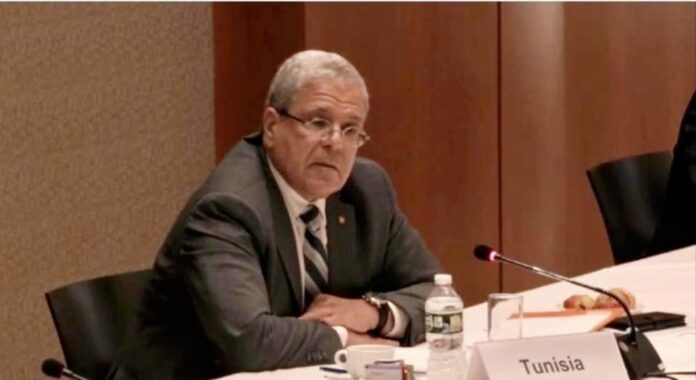 Tunisia has started to build a healthy and real democracy, through a set of exceptional decisions and measures, Minister of Foreign Affairs, Migration and Tunisians Abroad Othman Jerandi stated on Monday evening at the 76th session of the UN General Assembly (UNGA76) held in New York.

The country, he added has embarked on the path of rectifying the democratic process in keeping with the Tunisian people’s aspirations for a regime that guarantees its sovereignty and defends its rights and freedoms.

Democracy is an irreversible choice, Jerandi affirmed, pointing out that public and individual rights and freedoms are guaranteed and protected.

The FM further indicated that the establishment of a steady State open to all Tunisians is the main condition for social peace and sustainable development.Referring to the situation in Libya, Jerandi asserted that Tunisia will keep up its efforts and its role in its immediate environment and at the regional level to provide the necessary support for the finalization of the political process in this country.

At another level, the Minister called on the UN organisation to put an end to the suffering of the Palestinian people, deeming the situation in the occupied territories inconceivable.

As for the challenges that the UN organisation has to deal with, Othman Jerandi underscored the need to set up new policies based on solidarity and justice and will help build and resist crises.

Tunisia needs external financing of up to 6 billion dinars