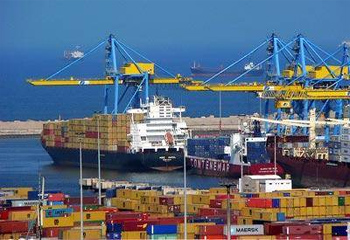 Tunisia’s trade deficit has dropped by 20.8% in the first four months of 2015, compared with the same period last year. The decrease was 933.6 million Tunisian dinars (MTD) in value, according to statistics from the Ministry of Trade.

The initial first results of external trade were marked by an improvement in the coverage rate of imports by exports, i.e. a 6.2% increase compared to the previous year.

Statistics showed that the boom in exports (125.3%), is due, primarily, to increasing external sales of agricultural and agri-food products, particularly olive oil exports.

The group of food products continues to achieve a commercial surplus this year, unlike the previous year.

Moreover, mechanical and electrical sector’s exports rose 3.5%, with sales in this sector growing 5.5% in April 2015.

The fall in import of consumer products continued, reaching a rate of 3% against a rise of 7.2% in the first four months of 2014.

This larger deficit is due essentially to the decline in energy exports, particularly those of crude oil with a decline of 355 MTD.

Tunisia down 14 ranks in Corruption Perceptions since 2010