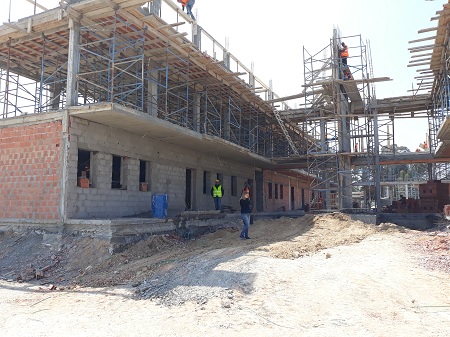 African Manager was invited on Wednesday, April 17, 2019 to accompany the European delegation to Tunisia, which visited a number of projects supported by the European Union (EU) in the governorate of Manouba.

The objective was to take stock of progress and progress, and to see their impact on the daily life of the inhabitants.

The European contribution is made through two major programs: the Program for the Rehabilitation and Integration of Housing Areas, with an estimated cost of 511 Million dinars, and the Program of Modernization of School Facilities (PMES), which has a budget of 700 million dinars.

The first, funded mainly by Europe (EU, French Development Agency, European Investment Bank, EIB), aims to improve the living conditions of populations in disadvantaged urban areas by contributing to the infrastructure catch-up effort in basic urban development infrastructure and by contributing to social development through the realization of social amenities. It concerns 155 neighborhoods and more than 800 thousand inhabitants.

The governorate of Manouba features several examples that show the effectiveness of the program: the neighborhoods of Saida, Ennasim, Snaheja and Torjmen within the municipality of Oued Ellil have undergone major changes in their infrastructure, especially with regard to sewage treatment (15 km), roads (31 km) , distribution in drinking water and public lighting (715 units).

The second axis is the PMES, co-financed by the EU, the Tunisian Government, the EIB and the German bank Kreditanstalt für Wiederaufbau (KFW); it is mainly aimed at renovating 310 schools and building 59 new schools, as well as building the capacity of the Ministries of Education and Public Works with training sessions in the fields of school construction, execution of works, procurement, etc.

In the governorate of Mannouba, this program is concretized by 9 renovation projects and 2 construction projects.

The most important examples are the renovation of the Ibn Abi Dhiaf high school with an estimated cost of 855 thousand dinars and the construction of the pilot high school of Manouba with its refectory.

This project will cost around 5.5 million dinars and will accommodate a thousand students. It will be operational at the beginning of the 2020/2021 school year.

Despite the importance of this assistance, members of the European delegation told African Manager that the Tunisian authorities are not doing enough to monitor and maintain these

achievements, which forces them to monitor some of their own projects to ensure their effectiveness. What a pity…