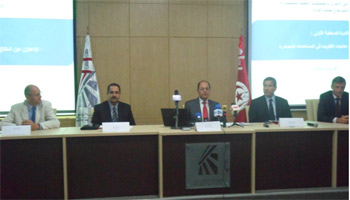 The Tunisian State will sell its confiscated shares in the capitals of Tunisiana and Ennakl, announced Slim Besbes, Secretary of State for Finance, at a press conference held Thursday, July 26, at the headquarters of the Tunis Stock Exchange. Four other companies will be subject to a similar sale before the end of the year.

Regarding Tunisiana, the state will sell its 25% stakes in the mobile subsidiary of operator Tunisiana, of which Kuwaiti Wataniya telecoms group, a subsidiary of Qatar Telecom, is the majority shareholder. The sale transaction will be conducted according to an international tender for the sale in a single block of shares of its participation in the company.

Tunisiana’s debt to the Arab Bank Corporation (ABC) currently stands at $ 365 million. This loan should be repaid before the end of the current year, excluding debts to several Tunisian banks. “Which is why this tender is launched,” said Slim Besbes.

Interested investors can act alone or by forming a consortium headed by a leader with other investors.

The deadline for submission of bids was set for November 2. Only financial groups and investment funds could be the purchasers. No registrations will be accepted from September 14, 2012. On the contrary, those registered are invited to collect the formal bid package from July 27, 2012. After collection of the package, registered investors will be able to conduct works of due diligence as part of an electronic Data Room available between August 6 and September 14, 2012, according to schedule and terms.

The Tunisian government is also preparing to launch an international tender to sell off 51% stake in the capital of car dealer Ennakl as part of the process of sale of confiscated shares of many companies belonging totally or partially to relatives of the deposed president and his wife. The timetable for implementing the various stages of the sale of the block of shares of the state’s participation in Ennakl is as follows: Launch, from July 30, of the technical pre-qualification process. The deadline for receipt of expressions of interest and selection is set for the beginning of September. During that month, tender documents and regulations of the Data Room will be sent to the pre-qualified. Receipt of financial bids will begin at the end of November 2012 and will end in December of that year.

The buyer of a 51% stake must submit to certain conditions, namely, experience in the automotive sector, especially in the importation and distribution, expertise in the management of quality and continuity with the distribution network.

The state will also sell its shares to the public in four other companies, namely, Carthage Cement in which the state holds 37% stake, City Car (99%), “Banque de Tunisie” (13%) and the International School of Carthage (ISC) owned at 100% by the state. These operations will be carried out before the end of the year.

The confiscated money transferred to the management committee through the seizure committee is as follows: 300 companies, 223 cars, 48 boats and yachts, 40 financial portfolios, 367 bank accounts, 550 real properties and 83 horses. These assets belong to 114 people. The real estate sector accounts for most of the confiscated property, followed by the services sector (14%), the commercial sector (13%), financial portfolios (11%) and agriculture (9%). The education sector represents the smallest share, or about 1%.

Tunisia, a customer that his bank can not let down…