Tunisia: statistics reborn from their ashes 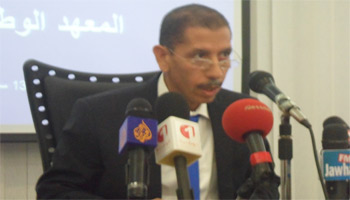 The controversy over the credibility of statistics is one of the topics that have spilled much ink in Tunisia since January 14, 2011. This has dictated the National Statistics Institute (INS) to use all its energy to defend its positions on the one hand, and work to convince Tunisians wary vis-à-vis the figures it produced to disguise the truth, on the other hand.

A position which Jalel Eddine Ben Rejeb, Director General of the National Statistical Institute (NSI) sought to confirm on Thursday, September 13, during a press conference at the headquarters of the INS by stating that “today nobody can question or challenge our statistics. We work according to international standards and we observe very strict rules. ”

He made an assessment of the economic and social situation of the country for the first eight months in 2012 and spoke about the future of the country and its economy.

Speaking of job creation, he noted that 24,500 new job positions were created during this period, mainly in the services sector, agriculture and fisheries and manufacturing industries.

A record trade deficit of 7 billion

Speaking about Tunisia’s external trade, he said exports reached 17,407.4 MTD at the end of August while imports totaled 2,832.4 MTD.

It should be noted that imports continue to grow at a considerable rate. At the end of August, in fact, exports grew only 3.2%, while imports rose by 14%. This is explained by the increase in imports in many sectors, namely energy with (37.7%), food (15.3%). However, a significant regression was recorded in textile exports which reached -9.6% against +9%, contrary to the exports of phosphates which grew 18.8%.

On another level, the official indicated that the growth rate of the economy in Tunisia reached 2.1% in the second quarter of 2012 compared to the same period in 2011 against 3.3% in the first half of 2012.

This is attributed to an increase in value added in non-industrial sectors, specifically the evolution of market services 5% reflecting a 13.4% improvement of services in hotels and cafes and 9.5% growth in transport services. The non-market services sector rose by 6.4%.

Tunis: Inflation drops to 5.8%, according to BCT