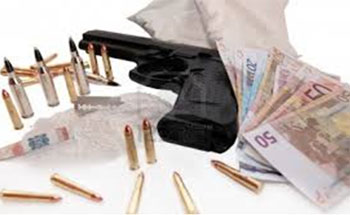 Investigations conducted by specialized terrorism services show a very close relationship between terrorist groups and drug barons, claiming, in this regard, that these groups use illegal trade in the name of the glory of Islam and the adoption of the Sharia, to buy weapons and explosives. Whether it is terrorism or drug trafficking, we must seek the causes internally.

Why terrorists or drug traffickers are created? We should not legitimize the issue, but we must identify the reasons to deal with them. This involves among others schools!

Contacted by Africanmanager, Mazen Cherif, an expert on strategic issues, security and military affairs and terrorism stated that the mafia activities (drug trafficking , weapons … ) are all methods used by these groups, citing, in particular, Afghans, to finance terrorist activities. According to him, drug trafficking in Tunisia is but organized crime and is a component of the phenomenon of terrorism as terrorist groups use drug trafficking to brainwash young people to recruit and enroll them in Jihad.

They justify their illegal drug sales by a fatwa that the unbelievers should go to hell. Tunisia has become a hub of drug trafficking and weapons and the spread of the Takfiri current.

There are Wahhabi elements that incite violence and thus conduct a brainwashing of young people to push them to join terrorist groups and this, according to them, in the name of religion, he has said.

Commenting information stating that over 80% of the smuggling operations and informal trade are conducted by religious sides, Mohamed Ghodhbane, Chairman of the Executive Board of the Union of Customs officials said that this information is exaggerated , pointing, in this connection, that smuggling operations are not the work of only faith-based elements, but also others.

On another aspect, Mohamed Ghodhbane said that many smugglers brandish shotguns to customs agents in response to the seizure of their goods. “Customs officers are facing many problems and dangers when seizing smuggled products.

From the outbreak of the events of the Revolution until now, threats of smugglers have increased from one day to another. However, the Tunisian customs does not give up and is making increasing effort to protect the country against any arms trafficking and smuggling of goods,” he has said.

It should be recalled that according to a study by the World Bank, Tunisia’s tax losses because of smuggling and informal trade amounted to 1.2 billion dinars, including 500 million dinars under tariffs. Tunisian authorities are called by the World Bank to “step up control by modernizing the means adopted in order to limit the impact of illicit trade on the economy and improve the living conditions of border populations.”

Between Tunisia and its neighbors (Algeria and Libya), the value of cross-border smuggling trade exceeds 1.8 billion dinars (around U.S. $ 1.12 billion). This figure represents more than half of the official trade with Libya and is superior to trade with Algeria, according to the study by the World Bank.

Disruption of gas supply from Nigeria plunges Ghana into darkness