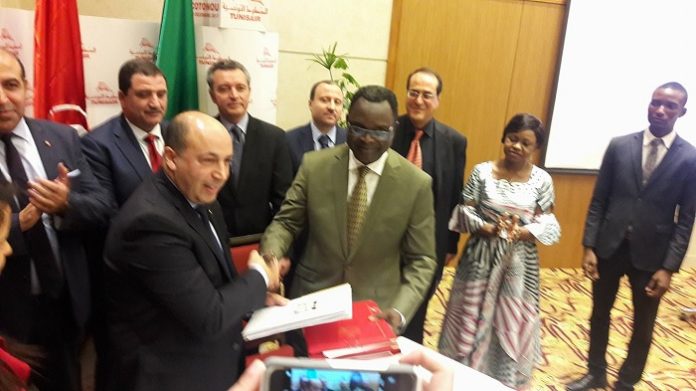 The A320 plane Farhat Hached of national carrier Tunisair landed, on Wednesday, December 13, 2017 at 3:25 pm (Tunis time) at the international airport of Cotonou, capital of Benin, after its takeoff from Tunis-Carthage, 10:30 am for its maiden flight 401 to its 7th sub-Saharan destination.

This new air service linking Tunisia and Benin with two weekly flights (Saturday and Wednesday) is part of the strategy of the Tunisian national carrier to expand its service network on the African continent and capturing new markets with value-added for such sectors as services, tourism, education, and health, said Tunisair.

The Tunisian delegation, which was hosted by senior officials from the Republic of Benin, is led by Minister of Transport Radhouane Ayara, accompanied by Tunisair CEO Elyès Mnakbi, and representatives of the Prime Ministry and the ministries of transport, tourism, health, higher education, agriculture, interior, finance and foreign affairs as well as MPs.

The delegation also includes representatives of the Tunisair Group, TABC, CONECT, UTICA, ONTT, FTH, FTAV and the Exporter’s House, as well as businessmen and journalists.

The inauguration of this flight comes after the one serving Conakry (Guinea) via Abidjan, opened last March, and will be followed by many others that will be over the next two years, like Khartoum ( Sudan), Douala (Cameroon), Ndjamena (Chad) in 2018 and Libreville (Gabon) in 2019.

Tunisair will work to strengthen the service of some of its African destinations by scheduling a daily flight to Abidjan in the summer of 2017 and 6 flights per week to the Senegalese capital Dakar against 4 currently.

Thus, the national carrier will have succeeded, thanks to this new commercial strategy, to provide service to 14 African destinations by the end of 2017, with an average of 74 flights per week, or 226 possible connections to its network from Tunis-Carthage airport.