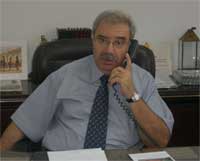 For Skander Ben Ali Kacem, first hotel owner to welcome the pilgrims of the El Ghriba, Israelis are tourists who used to visit Tunisia for years and the success of the new tourist season remains dependent on this important meeting.

The hotelier, who took stock of the hotel business, has also considered important to reassess the sector by implementing a comprehensive strategy including various components to achieve the desired goal and ensure better positioning.

An appeal has been launched in recent days by some members of the National Constituent Assembly (NCA) to prevent the entry of Israelis in Tunisia. What would be the benefits?

I think we made it a purely political issue. And my question is this: members that triggered this controversy have they started to conduct their election campaign? I do not know, but I assure you that we received for a long time Israeli citizens who came in tours in lawful and regular manner whether in the time of Bourguiba or that of Ben Ali and even after.

We have always received the tourists and this was never a problem. From an hotelier view point, we have no political considerations. We receive tourists who come for the El Ghriba and even outside of this event.

These tourists visit Tunisia throughout the year and there are many whose parents are from Tunisia. That’s why they all come in tours through Tunis, Goulette, Sfax and Monastir.

Again, we must remember that some of them come because their parents died here. It is certainly a nostalgia trip, but still, they are tourists who visit Tunisia. So these are tourists and they have formalities to which they are subjected at the borders.

I take this opportunity to remind also that we have received them for years, so why has this issue become a controversy?

We received these customers within stays or as part of the El Ghriba Pilgrimage and that was never a problem. But I think the current problem is that the controversy broke out when our country began to receive cruise tourists, since it has not received any cruise since 2011.

This is huge because a cruising boat is equivalent to three thousand people who spend money during their stopover on the Tunisian territory. Indeed, these cruisers who come to La Goulette arrive at 9:00 am and leave at 17:00, and during this time, excursions are organized for them to visit the Medina, Bardo Museum, Carthage, Sidi Bou Said etc…

It is worth noting in this context that travel agencies that receive these cruises are companies that have a large fleet of between 100 and 200 buses. So, we can say that this is a slice of very interesting clients.

Another detail that should be mentioned, two months ago, the Tunisian authorities had banned the landing of 13 Israelis who arrived onboard a cruise ship. It was a hard decision because, as I mentioned, it coincided with the resumption of cruises.

Cruise companies did not react on the spot, but it is sure they must be compensated.

After this incident, these companies have informed the concerned Tunisian sides that it is illogical to require 13 among 1,000 or 2,000 people to stay for a day confined in the ship.

These companies also sought to find an appropriate solution either accept all tourists or change the call. And, I can assure you that the refusal to receive them results in a significant net loss.

Another problem, these 13 Israelis prohibited from entering Tunisia can not apply for a visa to Ramallah because cruises do not go to Israel, but other countries such as Italy and France.

And here I am worried since these cruises are welcomed in other Arab countries with no problem. So what problem could there be with Tunisia? We are more Arabs than others? Frankly, I feel that those who are behind this controversy have launched their election campaign.

So what would be the cost?

The fallouts are numerous. The first might affect the influx of cruises in our country and the flow of tourists. Of course, I do not mean the flow of tourists on the El Ghriba where the impact is direct. And then if there is any influence on this pilgrimage, I assure you that the season will certainly go straight to failure.

I have been in this field for 35 years, and I ‘m sure this debate will have a direct impact on our sector. Worse, it could also affect our image at a time when began to hope that this year will be a favorable season.

Do you think we could have terminations of contracts by the tour operators?

We cannot speak of contract termination. But we can talk about the reason for not booking from customers which remain more important than the termination of contracts.

It is a matter of affluence on the market, but it has also to do with the outstanding image of the country.

In such a situation, how to act so that we can ensure a good start to the next season?

My message is clear especially to members of the NCA, “stop creating a controversy that would have a detrimental effect on the economy which is already at half-mast and does not afford such political overbidding.” “Stop outbidding that leads nowhere because the reception of Israeli tourists is not a new act. For me it is simply a form of early election, but expensive for a country in crisis. Honestly, it’s a shame.”

Can you give us an exact figure on the contribution of the tourism sector in Ghriba?

We cannot provide figures on the El Ghriba. But I can say that we reached 10,000 tourists. As a reminder, we were the first ones to restart the event in 1985 and we had received at the time 50 Israelis. Our efforts have led to increasing this flow to 5000 and 10 000 tourists. This is why travel agencies follow this major annual event is also a clue to the start of the tourist season in general.

These are the same words uttered by Prime Minister Mehdi Jomaa and Tourism Minister Amel Karboul.

This is not only an encouraging sign for tourism, but historically, the success of the season depends on this event. Indeed, this has been proven for years.

Simply, because the media coverage of this event affects the brand image of Tunisia.

Let’s talk about the current situation of hotels, especially in the area of Djerba?

The revolution has had a negative impact and 30 hotels have put the key under the door during the low season. The situation is catastrophic knowing that after three years, hoteliers are still unable to cope with the crisis.

The hospitality industry is going through a very difficult period. The challenge is great for all professionals who have accumulated debts of three years.

Despite the seriousness of the situation, it is important to highlight the role played by hoteliers during the advent of the revolution when they have demonstrated nationalism and patriotism by resisting and preserving jobs. This is a challenge, especially since wages represent the bulk of the expenses of the institution.

As a former member of the FTH, which actions you propose to strengthen its interventions?

I think the federation has an important role to play, especially since in the absence of solidarity among bosses, no change would be possible.

Djerba was a pioneer in the field of hospitality and professionals were more supportive than those in other regions.

In your opinion, what are the current problems in the sector?

Hotel problems are structural in nature, and this lasts for 20 years. However, there has been no commitment to resolve them.

According to me, two issues are essential. First, the federation has never played a role because there has never been a 100% agreement between hotels. Then it did nothing to enhance the brand image of hoteliers.

What about the quality of services offered by hotels?

The quality of services is a difficult problem and even chronic. It is due to the mismatch between the sector’s development and the evolution of the vocational training system.

In 1990, when I held an official position within the federation, 2000-3000 beds were added to the park annually, i.e. a significant rate of creations. Instead of 1,000 people trained per year, only 150 have actually been.

We created training centers and we got to train 400 people. But it was far below the actual needs of the country. We have retrained staff for years without achieving the desired objectives.

What are your proposals?

This is not a proposal, but a comprehensive policy which should include all parts. As hoteliers, we were consulted on several studies which have remained a dead letter.

Today, it is time to reassess the sector by implementing new plans since solutions cannot be found soon. We cannot, in the space of two years, for example, resolve the problem of qualification of hotel services that have experienced an unprecedented decline.

In this fragile context, how would you rate the performance of the new minister, who continues to draw the ire despite efforts?

She summarized in a few points the sector’s evils and managed to put her finger on some serious problems, including conventional techniques of promotion of the tourism product and the brand image of the country.

Tunisia: JICA to launch master’s and internship program in Japan