HomeFeatured NewsAli Laarayedh resigns with as bonus a time bomb for his successor!
Featured News

Ali Laarayedh resigns with as bonus a time bomb for his successor! 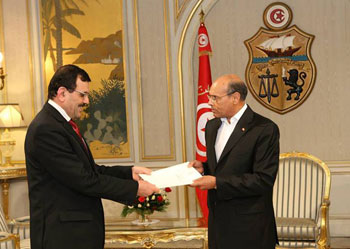 To this point, the commitments taken under the roadmap are met: The ISIE was elected as part of a clear consensus, the adoption of articles of the constitution is accelerating, and Ali Laârayedh has handed his resignation to Moncef Marzouki who tasked him with caretaking, pending the formation of the next government of Mehdi Jomaa.

The outgoing PM, who made the announcement Thursday afternoon, expressed hope that Tunisia will set a model of democratic transition. Everything seems so to go well.

But by broadening the angle of view, we see that the picture is not that pure white. First, the financial situation of the country is deplorable. Elyès Fakhfakh, who can not hide it, rightly used it as an argument to explain, Wednesday, the government’s refusal to reconsider the tax on vehicles. The Economic situation is characterized by acute financial imbalances, he said, stressing that such taxes will help avert possible increase in fuel prices, which will badly affect the system of production and living standards of citizens.

Then, the social situation is explosive because protests are spreading in all regions, with a greater risk of exploitation by terrorism, crime and extremist movements. Moreover, Ali Lâarayedh explained the new decision to suspend the application of the tax by this new data, giving the image of a government that goes back on its decision within 24 hours.

The health sector is facing, too, a new situation and the medical profession is united in saying No to the Minister of Health, who wants to pass a law on mandatory work of doctors in inland areas. The most recent proposal made by Abdellatif Mekki for a moratorium of several months and the partial enforcement was curtly rejected by the union of intern and resident physicians.

These three major issues, in addition to several other outstanding ones, those of the phosphate sector, development of inland areas and endemic unemployment, give an idea on the challenges facing the new government of Mehdi Jomaa in the weeks and probably the months to come.

It is still legitimate to ask the question: why the outgoing government will leave to its successor such a heavy legacy, despite the relatively long time for its exercise, and the legitimacy it enjoyed?

The Troika has made, since it came to power, fruitless efforts. During the first year (2012), the coalition tried to establish a legal and institutional arsenal to prevent the emergence of centrist forces on the political scene able to strike a balance in the political arena: the creation of Leagues for the Protection of the Revolution (LPR), proposal of a political exclusion bill, maintenance of fuzzy relations with religious extremism and even terrorism.

With the attack of the Libyan consulate in Benghazi, the assassination of U.S. Ambassador to Libya, the attack on the U.S. Embassy in Tunis in September 2012 and the assassination of Chokri Belaid and Mohammed Brahmi in February and July 2013, respectively, Ennahdha and its coalition have perceived that they are preaching in the wilderness, and they lost valuable time without taking any steps to meet the expectations of youth of the inland areas.

Obviously, fallacious arguments conveying accusations against social organizations and the opposition of not allowing the government to work swept aside.

It only remains for parties of the Troika, which are more and more isolated, to look for loopholes as elections are approaching: CPR distancing itself outright from Ennahdha, Ettakattol leading a guerrilla war against the Islamist party in institutions of the state and the NCA, the Ennahdha pouring into populism by proposing draft laws on Islamic finance, compulsory assignment of young doctors in inland areas, and pushing the Hizb ut-Tahrir, Salafist party the Reform Front and the Zitouna channel to pretend to Tunisians that the country swims on a sea of oil. And to guarantee a semblance of a balanced budget, its members propose these taxes.

But when the trap is closed, in the early days of the implementation of the Finance Act 2014, everyone realized that these elements cannot be an honorable outcome or even less the outlines of a persuasive speech for the next elections.

Tunisia: City Cars increases its capital to 18 million dinars by...