HomeFeatured NewsBardo attack: 80% of terrorists involved were arrested and Daesh is not...
Featured News

Bardo attack: 80% of terrorists involved were arrested and Daesh is not implicated (Video) 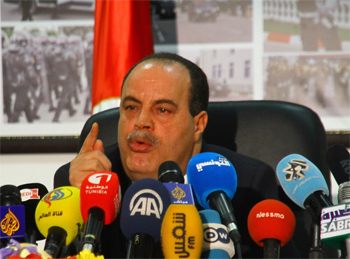 80% of the members of the terrorist cell involved in the attack at Bardo Museum were arrested. This was announced by Interior Minister Nejem Gharsalli, at a press conference held Thursday in the Bouchoucha barracks.

Two Moroccans and an Algerian on the loose

He said, in this regard, that 23 people, including a woman suspected of complicity with the attackers were detained. “They are mostly Tunisians. But he notes that two Moroccans and an Algerian were part of the group. Tunisian Maher Mouldi Gaidi, accused of supplying automatic weapons to sponsors is still at large, “said the Minister.

Last Wednesdays terrorist operation that killed 23 people, including 20 foreign visitors and injured 43 was led by terrorist Lukman Abu Sakhr, an Algerian jihadist leader and one of the leaders of the Ukba Ibn Nafaa Brigade.

“The 23 detainees, who were brought to court on Thursday, were divided into several groups. They are affiliated with AQIM, the minister said, adding that among those arrested the sponsor who planned and organized the attack, namely Tunisian Mohamed Amine Guebli.

Mohamed Ali Aroui, official spokesman for the Ministry of Interior, questioned at the end of the press conference, said that interrogations have established the involvement of the Ukba Ibn Nafaa Brigade not the Islamic State (Daesh) which wrongly claimed the attack.

Timeline of the attack

Speaking of the timeline of the attack, the minister said that it started at 12:06 when two terrorists stormed the museum and started shooting at tourists, killing eight of them in the first 4 minutes. From the first shots that were heard, the intervention of the security forces has been rapid. The minister noted that, in this context, special teams conducted a qualitative operation. They evacuated tourists, while this is not their mission because they are responsible of facing the two terrorists. “This is a first in the history of the security apparatus. These units were able to both face the two terrorists and evacuate tourists, and it’s symbolic,” also said Gharsalli while thanking all units who have demonstrated courage, composure and skill and managed to minimize the damage.

Terrorists were in possession of Semtex

The two terrorists, Yacine Labidi and Jabeur Khachnaoui, were in possession of Kalashnikovs and grenades and wore explosive belts packed with Semtex, a powerful explosive, noted the Minister, stating that this explosive is only used by armed forces.

“We managed to avoid a catastrophe because these two terrorists were wearing in their seatbelts a quantity of Semtex, an explosive whose use is generally military,” added Gharsalli before explaining that “Semtex was used by the former Libyan regime. »