HomeInterviewCarthage Cement is able to absorb much of the economic difficulties of...
Interview

Carthage Cement is able to absorb much of the economic difficulties of Tunisia, says Brahim Sanaa 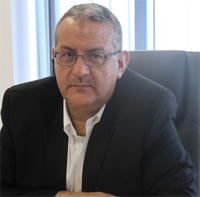 Appointed as new CEO of the company Carthage Cement for a period of three years, Brahim Sanaa had previously been CEO of “Ciments de Bizerte” company, a position he held since 2009. In an interview with Africanmanager he reviewed his new mission, the financial status of the Carthage Cement company, its prospects, the cement sector in Tunisia and its problems.

You were recently appointed as CEO of Carthage Cement, how have you found the company and what do you think of its financial situation?

I was appointed in Carthage Cement after serving in “Ciments de Bizerte.” It is a new experience that started from July 2014; it is another experience compared to Bizerte. The difference is that Bizerte was in operation, it has continued to work, to buy products for the production to run. We have not stopped working and we switched to new projects. But Carthage Cement is a company that came almost in production in 2014, and really started marketing cement from April 2014. Therefore, this is another challenge and we are expected to stand out in a sector that is in surplus by excellence. It is a competitive industry.

The sector’s capacity three years ago was about one million tons of cement. Today, there are between three and four million tons of cement in excess and the start of Carthage Cement takes place under these conditions, so you have to stand out in an area that is almost in surplus par excellence.

Today, we went practically operational, we are in full swing, and we come gradually to find our place in the industry. Already in the first half, we realized about six hundred thousand tons of sales which is not little. We have taken our local market share to the tune of 11%, which is very significant for a few months of operation.

In terms of export, we are the first, we have exported one hundred and sixty three thousand tons; this is the most important figure in all export sectors that are intended to Algeria and to Libya.

It should be noted that Carthage Cement is best known by the cement, while it is more than that, that is to say, the group has three segments: cement production which is of the order of 6,500 to 7,500 tons of cement per day.

There is also the ready-mix concrete which is an activity not well known but which began to emerge gradually, especially in the greater Tunis area, it has a production capacity of 2,600 cubic meters per day. There is also the aggregate activity that is behind the creation of the Carthage Cement Group and achieves an output of 12,000 tons of aggregates, one of the largest companies in aggregate marketing.

What is the difference between bagged cement and bulk cement?

Bagged cement is intended for the consumption of the building, that is to say, building construction especially small projects.

For the bulk, it concerns major projects and is typically used by companies that sell ready-mix concrete or large contractors who have units of concrete.

The cement sector suffers from many problems, what are the key ones?

The liberalization of energy prices is already used as well as the local price of cement. But the state has not yet liberalized prices at export, which is a problem. So we have a very large surplus and we are negotiating with the Ministry of Commerce and the Chamber of cement production. We have received pledges for the liberalization of export in the coming days. The liberalization of export will ease the sector and this will avoid the price war, every effort was made to release the price and it prices have been almost kept stable, but if the production will be higher than the capacity of domestic consumption, this may undermine a sector that employs more than ten thousand agents.

How is the cement sector in Tunisia before and after the Revolution?

Before the Revolution, we used to produce between 7.7 and 8 million tons and exported 1 million tons. Therefore, consumption was around 7 million tons.

Consumption increased mainly in 2011/2012, following the growth of the phenomenon of uncontrolled construction, demand was high, we had at that time faced a shortage, much speculation, hemorrhage of parallel trade and anarchic export, there was an illegal export … Before the revolution, there were six cement plants, today, there are eight with an increase in production capacity.

What are the prospects of the Carthage Cement Company?

We really and truly hope that Libya will stabilize because Algeria is not able to absorb all our surplus that will range between 3 and 4 million tons. We are in competition with the Turks; therefore, we must look for adequate solutions.

We held, last week, a meeting with the Department of Transportation to study the feasibility of developing the infrastructure because today we are exporting only through the port of Bizerte and the port of Gabes … We also expect that the government resolve the problems in the hope that the situation will stabilize somewhat because there is really a real problem for the industry. We have a surplus that exceeds 3 million tons, we must sell it.

In anticipation of this surplus situation, we will, from October, start producing HSR (High-Sulphate-Resistant) cement. It is very important because in our new strategy, we must diversify the product so we already started to produce the HSR since September and certification is expected in late October due to delays.

We rely heavily on the flow of a large amount of HSR, because there is a high demand for this product both on the local market and export markets, particularly in Algeria. We have already established a sales network that begins gradually to find its way. We have a business strategy and are not rushing things, but we have been advancing little by little since April. With the diversification of the product, we have invested heavily in the service … We hope that the economic environment will help us move forward again and again, we are very proud because we have accomplished significant achievements over the course of almost four months.

Tunisia is living in an economic climate that is viewed as more or less sensitive, how can we revive the Tunisian economy and are you optimistic about the future of the country after the next election?

I am an optimist; major projects such as Carthage Cement are able to absorb much of the economic problems in Tunisia. Security, development and creation of large projects are vital vectors to revitalize the Tunisian economy. It is estimated that 2015 will be very good in all respects and we are always optimistic about the future of the country…