HomeFeatured NewsTunisia: hospitals gutted by strike of their staff, a daily loss of...
Featured News

Tunisia: hospitals gutted by strike of their staff, a daily loss of more than a billion 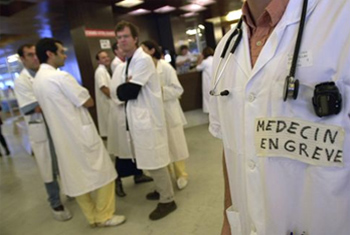 Health workers have been on strike since September 22. And considering the suspension of financial transactions in health institutions during this protest, Tunisian citizens are entitled to free health care until the end of the current week.

In a statement to Africanmanager, Nizar Laadheri, Special Adviser to the Minister of Health said, “The state suffers a daily loss of over a billion millimes, because of this strike.

He said the financial losses for simple medical consultations are estimated at 500,000 dinars a day. Regarding analyzes, scanners, and all other internal operations, financial losses are even bigger, he has said.

On another side, the special advisor to the Minister of Health said that the Tunisian General Labor Union (UGTT) has declared the strike without informing the department of its intention to strike.

He added that negotiations are underway with the UGTT, recalling, in this context, that disagreements were overcome, except for a special premium of hospital workers that has not yet been discussed (a premium of 200 TD).

Members of the medical committee at Charles Nicole Hospital react!

In protest against the strike called by the hospital staff, members of the medical committee at Charles Nicole Hospital stressed in a statement that “The UGTT has declared a six-day administrative strike, paralyzing especially the hospital cash desks.

Therefore, everyone will benefit of totally free care. However, in the present state of things, Public hospitals are undergoing a profound structural and fiscal crisis. Large university hospitals and regional hospitals are paying the price. The health professionals suffer daily the consequences of insecurity and limited resources.

The public sector that bears over 80% of the cost of applicants’ care continues its downward spiral in the general indifference. The fiscal situation of a large teaching hospital as Charles Nicolle Hospital had recorded in 2013 a budgetary imbalance of 4,337 thousand dinars. This is also the case for almost all the major hospitals, the statement said.

It added that “by triggering this administrative strike highly affecting loss-making hospital institutions, the fiscal situation of the latter is seriously compromised. One can not claim to want to protect the rights of citizens to health while affecting the structural and functional integrity of public hospitals.

This is an unacceptable violation whose impact will be borne in the short-term by health professionals and people seeking care. It would have been logical for health professionals, doctors, paramedics and administrative staff to mobilize for a real bailout of the public hospital which is an essential element, ensuring access to care and a basic place of training. ”

“No union demands can justify squandering the proceeds of a public institution. The UGTT, whose contribution is undeniable in the current political landscape of the country, knows better than anyone that the policy of scorched earth can only deepen the crisis and reduce the chances of success. Public hospitals are still standing, but for how long?” the statement reads.

Nigeria’s economy on the brink of collapse, opposition warns