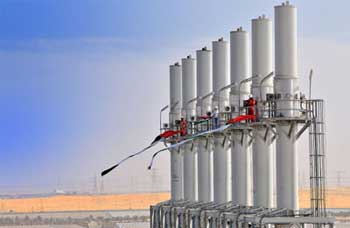 “Shams 1 is an example of the significant investment opportunities in clean energy that exist in the area, which in turn would help stimulate the region’s wider economic and social development,” remarked Yousif Al Ali, the general manager of the Shams Power Company.

Also known as Al Gharbia, the emirate’s Western Region is the heart of the UAE’s hydrocarbon industry. But, according to Al Ali, it has huge potential for the generation of clean energy.

“With 365 days of sunshine, and large tracts of land available, Al Gharbia is a natural location for large scale solar energy projects,” he added.

According to Al Ali, Shams 1 has been a big success, since it began producing electricity in 2013.

The $600 million Shams 1 concentrated solar plant, the largest renewable energy project in the Middle East, is a partnership between Masdar, Total and Abengoa.

The plant has consistently performed to its design parameters, delivering electricity to 20,000 UAE homes, displacing 175,000 tons of CO2 per year.

Abu Dhabi’s Western Region comprises 83 per cent of Abu Dhabi’s land mass, but it is home to less than 10 per cent of the emirate’s population. It is rich in hydrocarbons and has a mix of traditional industries including agriculture, fishing and tourism.

As part of the Abu Dhabi 2030 Plan, annual revenues from the region are forecast to top Dh400 billion ($100 billion), according to the official Al Gharbia website.

Abdulaziz Al Obaidli, the process engineer at Shams Power, also give a presentation about Shams 1, a 100MW power plant located outside the city of Madinat Zayed, 170 miles southwest of Abu Dhabi.