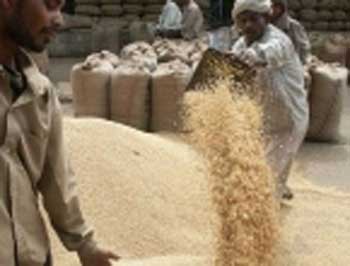 Egypt aims to buy about half of its domestic wheat harvest this year at 4.4 million tonnes and is unlikely ever to get much more from farmers, who need to reserve the rest for seed and to feed their families.

But at most, the government will be able to increase domestic supply by around 1 million tonnes a year through improving storage and transportation.

Supplies Minister Khaled Hanafi, whose ministry is in charge of local wheat procurement, said this week the government had purchased 2.75 million tonnes to date in the harvest season that began in mid-April, on track to meet its target.

The harvest is now in full swing in northern parts of the breadbasket region of the Nile Delta and nearly finished in fields further south.

Hanafi said his ministry was pushing ahead with the plan to buy 4.4 million tonnes of domestic wheat this year. The target consistent with the target set, but not met, last year by the government of ousted Islamist President Mohamed Mursi.

The government says that improvements to the outdated storage system and the addition of new silos could cut down on the more than 1 million tonnes lost yearly due to storage and transportation problems.

Yields for the Egyptian wheat crop are already among the highest in the world. Unlike fellow wheat producers such as Australia with inconsistent production, the Egyptian crop is reliable.

Many farmers in rural agricultural areas in the verdant Nile Delta region are willing to sell only about half of their harvest to the government.

Men who eke out a subsistence living on their land, using mostly the technology that their fathers and grandfathers did, say they are already selling the maximum amount they can.

Traders surveyed in a Reuters poll ahead of the harvest put the year’s crop at around 7 million tonnes, in line with last year’s total.

Private traders’ estimates for the local crop are consistently below government estimates, which also do not vary significantly from year to year.

The US Department of Agriculture (USDA) expects Egypt’s production to reach 8.95 million tonnes this year, up only 300,000 tonnes from last year.

Any efforts to expand wheat production onto uncultivated land are hampered by soaring population growth and illegal building on farmland, which officials say has increased since the 2011 uprising that ousted Hosni Mubarak.