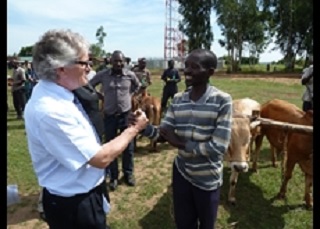 The USD 21 mio (UGX 77 billion) programme was launched in the Northern Uganda district of Nebbi on Tuesday, 10th November 2015 by the Ambassador of Denmark to Uganda, Mr. Mogens Pedersen.

The colourful event was attended by over 600 people, including beneficiaries, partners and government officials from both the local and central government.

The programme will over the next four years focus on the recovery of Northern Uganda by creating inclusive and shared growth among communities in West Nile and Acholi-land in order to help close the “inequality gap” between Northern Uganda and the rest of the country.

The programme, which is the third phase of Danish support to Northern Uganda, is part of Denmark’s long term investment in a sustainable post-conflict recovery, reconciliation, and inclusive growth after two decades of violent conflict in the North.

The programme will provide support to over 60,000 households in West Nile and Acholi Sub regions of Northern Uganda to increase their agricultural production and marketing will also support the local communities to construct agricultural related rural infrastructure such as access roads, market places, water points (springs and swallow wells) and tree planting. During the launch, Ambassador Pedersen stressed the importance of addressing inequality and shared growth through women’s empowerment, both as a question of human rights and as an engine of growth. “”

After longer periods of instability and violent conflict Northern Uganda has had prolonged periods of insurgency and the region lags behind the rest of the country in the main socio-economic indicators. The programme will therefore also contribute to the equitable participation of Northern Uganda in the economic development of the country. In this regard, ambassador Pedersen ended his speech by concluding ‘we will be putting our funds, where the needs are greatest’.