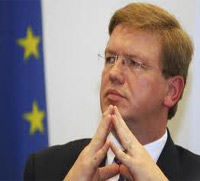 How could you describe the EU’s relations with its neighbors so far?

Our relationships with our neighbor partners are probably at a crossroads. Since the adoption in May 2011 of a new European Neighborhood Policy, based on mutual accountability and strengthening the partnership with civil society, the EU was quick and determined to lay the foundations of this new policy.

We can say that we are now better equipped to develop our relationships with each of our partners, in tune with their own aspirations, needs and abilities. We have new instruments and since the entry into force of the Lisbon Treaty, a more coherent approach.

You have made numerous visits to neighbor countries and received feedback on the ground. How is the EU perceived by citizens of these countries? Is it considered an honest and reliable partner?

I think the EU is seen as a reliable partner that respects its commitments. And this is not just based on the views expressed by the governments of the partner countries but also on feedback from civil society actors that I had the opportunity to meet many times last year.

This positive feeling is based on facts: the EU has made great progress over the last twelve months. Let me give you some examples. We have adapted our policy instruments. We have continued to upgrade our contractual relationships, we have been mandated to open new trade negotiations, we started dialogue on mobility and reoriented and strengthened our financial aid (600 million to support the democratic transition, economic development and interpersonal contacts) by extending the mandate of the EIB and the EBRD, we also opened the door to new – substantial – investment in partner countries.

What are the priorities in the South in the light of the Arab Spring?

As I already explained, the EU reacted swiftly and decisively to historical events in the Southern Mediterranean, as shown by the two Joint Communications of the Commission / High Representative on “A Partnership for Democracy and Shared Prosperity with the Southern Mediterranean,” adopted on March 8, 2011, which clearly support the EU’s call for change and for more democratic and open societies, combined with incentive-based approach to support political, social and economic reforms in countries of the region. In addition, the Communication on the review of the European Neighborhood Policy, adopted on May 25, 2011 gives further guidance to the management of these priorities.

While refining its approach to neighborhood policy, highlighted in the conclusions of the recent European Council of March 1-2, 2012, the EU is also developing its response to regional challenges, response that includes among others the Union for the Mediterranean.

The EU, more than any other international actor, must accompany and support transitions to bear fruit. Itself sharing the history and destiny of the Mediterranean, it should not fear electoral success of politicians inspired by Islam.

With regard to the Union for the Mediterranean, the EU takes over from France as co-president, what will be the impact of this change?

The EU’s taking over of the North co-presidency of the Union for the Mediterranean (UfM) reflects the commitment of the EU to play a central role in accompanying profound changes in the Southern Mediterranean.

Since February 27, 2012, when the European 27-member-state institutions took over the North co-presidency, all activities related to the UfM are reviewed, analyzed and discussed at the European level.

European institutions will endeavor to share with their partners in the South the efforts made by the EU in several areas, for the benefit of the inhabitants of the region and in the spirit of consistency, uniformity and partnership. It will also be essential to strengthen sectoral cooperation and achieve the necessary synergies between this sectoral cooperation and the work of the secretariat which consists of achieving concrete projects.

How will the EU policies towards its neighbors evolve?

I think there are a number of areas where the EU should also make significant progress in the near future. We must do more to promote investment in EU partner countries. We need to make progress in the agenda of the mobility in the South and East of the neighborhood, by, among other things, encouraging member States of the EU to use more systematically the possibilities offered by the European Code on Visas. We must also do our best to speed up the process of opening negotiations over a first zone of deep and comprehensive free trade in the South. The ongoing bilateral negotiations on the terms of liberalization of services trade and establishment must accelerate. Sectoral cooperation should be strengthened in order to achieve concrete results in the coming years. We also need to gradually open our programs and agencies to the participation of our partners. The new European Neighborhood Policy defines at this point the final stage in this area, one that is ambitious with a concrete idea of the results we want to achieve.

Report of the Chairperson of the commission on the follow-up of...