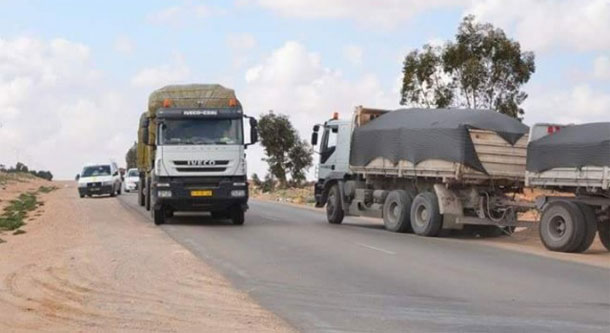 The negative repercussions of the health crisis on the global economy are certainly significant, and Tunisia is not spared either.

This is mainly due to the abrupt halt of activities at the national and international levels, the cessation of recovery of corporate debts, and the indebtedness of states, the decline in exports…

Moreover, Tunisia’s sales to neighboring countries such as Libya are in a remarkable slide.

This is the largest contraction in the economic history of Tunisia. The decline has mainly affected the food sector.

According to official statistics announced by the government, Tunisia’s exports of agricultural and food products to Libya fell by 17.5% at the end of April 2020.

This decline is explained by the disruptions in trade due to the impact of the COVID-19 pandemic on international trade.

On the other hand, exports of fruits (citrus fruits) grew by 167.5%, or about 2.6 MD, bearing in mind that fruits, vegetables and fish products represent 6.5% of the total agricultural exports to the Libyan market.

Fishing is the fruit most imported by Libya, accounting for 57% of the total quantities exported.

The export season for this fruit started in May 2020.

In the absence of a clear-sighted economic recovery strategy with Libya, Tunisia may lose this market for good.

Before 2014, Tunisian agri-food products dominated the Libyan market, which are replaced today by those of Turkey because 80% of the products currently on the shelves of Libyan supermarkets are Turkish.

Tunisia hopes to see its trade with this market intensify further in order to regain the level of 2010.

Already, the volume of Tunisia’s trade with Libya has reached 1.7 billion dollars in 2019.

It should also be recalled that in the first half of 2018, the amount of Tunisian exports to this country had reached 900 million dinars (€275 million), nearly 29% more than over the whole year 2017.

This is an encouraging progress, but economic actors continue to see the glass half empty.

The Libyan civil war in 2011 has had a very negative impact on Tunisian companies operating on Libyan territory.

Considered by some Tunisian business leaders as an “Eldorado”, Libya became a country unfavorable and unsuitable for business once the uprising against Colonel Gaddafi began.

Almost all Tunisian factories in the country had to close and their staff was repatriated due to major security risks.

However, some Tunisian companies had dared to set up business in Libya in 2012, once the revolution against Gaddafi was over!