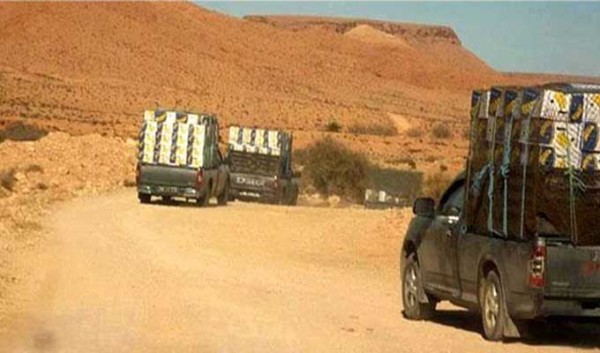 Tunisia has not finished suffering from a growing proliferation of smuggling. So much so that the region of Ben Guerdane under the governorate of Medenine has become the “capital” of the informal economy in Tunisia.

According to many experts, this type of trade fosters unfair competition that can amplify distortions to the detriment of the formal sector which pays duties and taxes and employs employees.

This also leads to losses of tax revenue for the state, not to mention the risks to consumer health since products imported from Libya are not controlled at the level of technical, sanitary and phytosanitary import control services, which results in a worsening of the imbalance of the balance of trade and deficit.

Products imported from different Asian countries flood the southern border region, the starting point and focal point of a traffic that affects all kinds of products. That traffic is managed by about sixty wholesalers, 1,200 retailers, and 600 carriers.

Illegal transfers of foreign currency from the Ben Guerdane region to the outside world vary between 1 and 3 million dinars per day, the equivalent of 750 MD per year, according to estimates.

Some 250 to 300 forex traders are involved and about 300 thousand liters of gasoline per day are smuggled into Tunisia.

The culture of informality is taking root dangerously as a source of income for many families to the detriment of Tunisian business.

Back from Ben Guerdane, Tunisian citizens testify. This region gives the impression of being on the outskirts of the country with this parallel trade which is not subject to any tax and social levies.

All goods are imported, flat screens of all brands from Saudi Arabia or Dubai, in particular, are offered there.

Some stores have even gone so far as to display a sign that reads: “Dubai Center for Trade” and this is just one of many samples. All of which adds to the torment of those responsible for Tunisian trade policy.

Fuels, too, and above all!

The Ben Guerdane region represents the main entry point for automotive fuels for the entire southern half of the country.

Maintaining Ben Guerdane in a situation of lawlessness by tolerating the non-application of national trade regulations is usually justified by the low development of economic activity in the region.

However, this can in no way authorize this type of trade, although the avalanche of imported food and industrial products risks destroying the entire Tunisian economic fabric and affecting all sectors and industries, since smuggling has spared no product.

Official figures show that smuggling and informal trade generate losses for the Tunisian state of 1.2 billion dinars including 500 million dinars in customs duties.

And in the absence of any measure or strategy put in place by the regulatory authorities, this phenomenon has continued to grow, despite the efforts made by customs brigades to combat this hemorrhage.

It is very difficult to quantify the phenomenon of smuggling in Tunisia. This quantification is not impossible but remains approximate given the magnitude of the phenomenon.

Nevertheless, it is important to specify that smuggling and the informal sector are “structured” activities from the point of view of their organization.

Barons organize occult niches and supervise networks acting on their behalf, generally according to a pyramidal, almost mafia-like model.