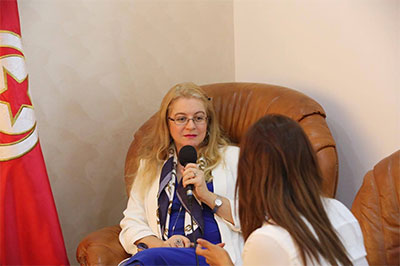 In an exclusive interview with African Manager on Wednesday, October 5, Hela Cheikhrouhou, Minister of Energy, Mining and Renewable Energy warned against interruptions experienced by the Gafsa Phosphate Company (CPG) and the Tunisian Chemical Group (GCT).

She said, in this context, that these wild movements are threatening the agricultural season since there is no longer production or transfer of phosphate.

The situation is worrying according to her, especially as GCT plants may stop and no longer produce DAP, a material eagerly awaited by farmers.

On another level, she has defended the measures taken in favor of the population of the Gafsa region, pointing out that the government had the courage to announce new hires while the public accounts are in the red.

The minister also spoke of the steps to be taken after the adoption of the new law on renewable energy while focusing on interconnection projects.

The sit-in in the mining basin seems to have a cyclical nature. Indeed, after the settlement of the dispute in Mdhilla, now the Metlaoui production site is paralyzed by another anarchic sit-in. Could you tell us more about the situation?

Efforts have been made by the new government, which had the courage to go ahead and announce over 2,800 new job positions in the CPG, an announcement that was eagerly awaited by the people since May 2015; and in two weeks we launched the competition in a transparent process. But now, we are facing protests with people who want to stop production.

With this blockage, several experts raised the scenario of bankruptcy. What do you think and especially is it possible to quantify the losses?

I would do not now speak of a bankruptcy scenario, but I can describe a reality we observe. It is an ongoing and certain deterioration in economic and financial fundamentals of the CPG and GCT and their subsidiaries, which cost a lot.

It should be remembered that this group was able to generate 800 million dinars of profit in 2010, while in 2015 it recorded a loss of about 200 million dinars, consuming more than two thirds of its capital.

Therefore, the fact of paralyzing the activity of operators means that they now suffer a payroll that was tripled while production fell sharply.

In any case and despite that we continue to pay the salaries of 27,000 employees, equivalent to 500 million dinars, the companies are no longer able to produce 3.5 million tons due to these interruptions. With this rate, it is impossible to cover the expenses of the group.

There is something else: these interruptions are now threatening the agricultural season since there is no longer production or transfer of phosphate. So plants of the chemical group may stop and no longer produce DAP, a material eagerly awaited by farmers.

If we continue in this process, what will be the future of the group?

I prefer not to imagine a possible continuous blocking, but I’d imagine that reason will prevail and allow the group to fully play its role. Otherwise, we will end up with 27 thousand households without pay.

At your department, have you developed an action plan or do you think of bold steps to better address this problem?

Despite the difficult situation of the group, it is very courageous to announce about 3,000 new job positions additional to 27,000. We announced the recruitment immediately and transparently of these employees we need only partially because they correspond to the needs in 2017 and 2018.

So the first measure aims to achieve social peace.

The second measure is related to the use of the remaining 40 million dinars in the budget of social responsibility to prioritize things well identified by the population as necessary. For example, 15 million dinars will be invested through the BTS and BFPME and funds to create hundreds of micro-projects in the region so as to create more jobs.

We have directed efforts towards job creation, but these measures are not publicized. These are courageous and even bold steps. For, we must be brave to initiate such expenditure when we are in the red.

Besides the recruitment measure, will there be other actions affecting for instance the transfer of production, a subject that continues to generate controversy?

If there are people that do not allow the transfer of phosphate, the solution is to consider the cost reduction of the group and the review of the salary structure and finally employee composition.

With this gloomy climate, could there be resort to the security solution?

From the moment, the local population does not make it clear it wants the resumption of phosphate; we are seeing what the street is telling us.

Today, the population must realize that the company that feeds many homes is sick. These wild shutdowns affect not only the majority of Tunisians through public finances, but also the region itself, by threatening 27,000 homes.

On another level, the Renewable Energy Law was adopted for some time. What new steps to follow?

Today, all decree texts or other organizing the operation were issued. There remain some model contracts that are at the Prime Ministry.

What is needed is to complete the first set of projects which will be announced.

At this level, it should be indicated that there will be projects in the form of authorization for small capacities and others in the form of tender. We need to work on the way to make these tenders structured and ensure that the delay in initiation of independent electricity production projects by the Renewable be caught.

Our ambition here is to publish by next November the capacity we would buy as tender or authorization for different technologies including solar and wind power.

Your department has announced a 30% target for the contribution of renewable energy in electricity generation by 2030. Is this goal still relevant?

This objective has been discussed in the past and it will also be examined at the Cabinet meeting as one of the main focuses of our energy strategy 2030, with a target of 30% of our electricity production from renewable energy.

Whenever possible, it would be good to try to achieve this goal as soon as possible before having a goal that goes beyond. This requires better performance in terms of network stability to handle this intermittent renewable energy, but also to think of solutions in terms of interconnection with Italy for example, to absorb this intermittent energy.

As such, what about the Tunisian-Italian electricity interconnection project (ELMED): renewable energy potential and regulatory framework?

The studies are being developed and many others remain to be done. At this level, we are mobilizing donations to complete these studies.

A dialogue is underway with our Italian partner, the European Union and the World Bank to see if it will be possible to obtain funding in grants for some projects.

Are there any new features compared to the Tunisian Solar Plan (TSP)?

This pilot project was adopted by the Cabinet meeting this summer. This is one of the pillars of the large energy strategy and the combination of all the projects that need to be launched.

The TSP is a name used since 2008 including the series of projects including, the first will be unveiled by the end of this year. It is the program of renewable energy for which there was a new law.

And what about the southern gas project?

This is one of the largest projects for the consolidation of infrastructure for production and transportation of natural gas in the country, besides the conversion of a substantial portion of the gas into LPG.

This “Nawara Development Project” is of particular importance in this situation. Unfortunately, he has met huge problems and lagged behind…

Currently, most of the obstacles have been removed, but we have a few problems related to lands already paid and compensated for which there is still illegal expropriation by some individuals. So, work is blocked in some places, pending resolution of this issue.

Crude oil production experienced a fall of 89% at the end of August 2016, according to the latest figures released to African Manager. Will there be new exploration permits to overcome this situation?

It is for this reason that new exploration and development permits require clarification at the HPR regarding Article 13 of the Constitution.

The Committee on Industry, Energy, Natural Resources, Infrastructure and Environment is currently reviewing this issue and we believe this problem will be solved during this year.

This legal change is important in so far as the number of exploration licenses has dropped from 50 permits five years ago to only 27 currently.

With the establishment of a new hydrocarbon price adjustment mechanism launched in July and the instability of oil prices, are you planning to revise upwards the prices of hydrocarbons?

Indeed, the price of oil went up and we’ll see what the formula gives in mid-October.

Tunisia has adopted since last July a new mechanism to automatically revise oil prices every three months and, depending on oil purchase price by the state, and the value of the dinar against the US dollar. Moreover, oil prices fell early this year.

You mentioned that the government could resort to shale gas to meet planned expenditures. Have you developed a strategy to better defend your position also with civil society, which is opposed to that kind of solution?

We must explore all solutions to develop national resources in terms of oil. Because they are the most economical solutions and highly job-generating ones.

All other solutions would consist in importing more and more gas from Algeria or suffering the huge cost of the terminal infrastructure of natural gas or to bring coal from abroad.

All alternatives are more expensive and negative for the balance of payments, while weakening the Tunisian dinar. That is why we must seriously study this natural resource in order to know the negative effects and how can we mitigate its impact and by managing it with the best technologies. Thereafter, it is important to measure the positive effects and make the right decision.

For the current stage, we are too far from producing shale gas and we cannot even explore it for now…