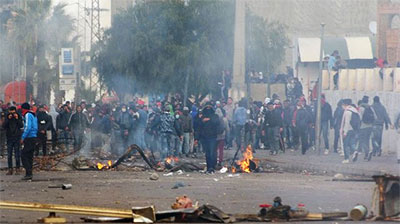 The Tunisian Forum for Economic Rights (FTDS) warned the government against “social explosion” in the very near future, if the demands are ignored.

“We cannot ask those who are hungry and are disappointed to be rational,” Abderrahmen Hdhili said on behalf of the Forum. He indicated: “many indices are beginning to emerge.”

Hdhili, in this context, pointed to the government’s inability to manage this issue and to find a remedy to the social unrest that is now gaining other regions.

The government could not resist!

“The explosion would certainly be massive, especially as sit-inners continue to suffer not only in Gafsa and Kasserine, but also in several regions including coastal areas,” the president of FTDS warned in an interview with African Manager on Thursday, October 6, 2016.

According to him, Tunisia may witness a scenario worse than that of 1984.

The government of Youssef Chahed is now making the same mistakes as its predecessors, while sending negative messages.

“The national unity government has certainly managed to solve some problems, but in return it rejected the demands of many protesters even refusing to engage in a serious dialogue or to be interested in their problems,” he explained, citing for instance thirty unemployed from the governorate of Kasserine who have been staging a sit-in outside the headquarters of the Ministry of Employment for about nine months or movements in the mining area which seem to have a cyclical nature.

More mobilization in the streets comes at a time when the Tunisian economy has been facing a difficult period since the revolution of January 14, including the decline in the growth rate, worsening of the budget deficit and debt…

This crisis has forced the International Monetary Fund (IMF) to revise its growth forecasts for the current year, setting it at 1.5% while it was estimated at 2% in April.

For many economic experts, such a review proves the persistence of the economic recession in the country.

Indeed, the budget deficit would be 7.1% instead of 3.9% provided for in the 2016 Finance Act, i.e. an additional deficit of 2.9 billion dinars. Worse, the results in the first six months of 2016 show a shortfall of 739MTD, compared with the results of the same period in 2015 at the collection of taxes on companies’ profits.

The recession is costly for the Tunisian government, which needs $ 20 billion distributed over five years to boost economic growth and master the macroeconomic balances, according to recent government statements by Minister of Investment and International Cooperation, Fadhel Abdelkefi.

It is time to initiate a national action plan

The same old story for thirty years! It is imperative to initiate a national action plan to allow recovery of the economy and revitalize the Tunisians, as recommended by Abderrahmen Hdhili.

Developed by all stakeholders involved, including the government, social partners and NGOs, this new project should include the structural reforms necessary for all economic sectors.

Among the reforms suggested by the FTDS, tax reform and courageous actions in the fight against corruption and the informal economy.