Hamdi Meddeb to Africanmanager We will invest more in regions 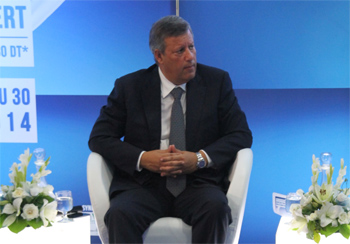 CEO of Delice Group, Hamdi Meddeb, who was present on the morning of Thursday in the Tunis Stock Exchange to ring the bell marking the start of trading on the security of the holding, said in a statement to Africanmanager that in line with the IPO, the group will continue its investment projects.

The focus area is none other than the food industry and the lion’s share would be allocated to regions, according to him. “We expect not only money but also the development of the country,” he said.

Furthermore, in a statement to the press, Hamdi Meddeb, said the IPO will benefit the Delice Group, restructured into Holding.

The new status of listed company, which is a guarantee of continuity, will increase the visibility of the group and help it implement its strategy of expanding its markets.

Khaled Zribi, Board Chairman of the Stock Exchange said, for his part, that through this IPO, the Delice Group will provide a good example to size groups to join the financial market, in spite of a difficult situation and a liquidity crisis.

Minister of Economy and Finance, Hakim Ben Hammouda said the listing of Delice Group is considered as the third largest operation in the history of the Tunis Stock Exchange, showing further optimism about the financial market, in spite of the liquidity crisis raging in Tunisia since the Revolution.

Director General of Mac SA, the broker responsible for the operation of Delice Holding Mourad Ben Châabane pointed out, on his part, that for the year 2013, the Holding Group had achieved sales of the order of 1.4 billion dinars and a result of 25 million dinars. The Holding offers nearly 3,000 direct and indirect jobs.

Regarding the IPO operation itself, which started since yesterday October 15, 2014, Delice Holding, one of the largest Tunisian groups wants to raise 125 million dinars. The opening of capital is made by means of an Open Price Offer (OPO), a new technique, used for the first time in Tunisia, which consists in setting the price after a range was proposed by the broker, Mac Sa.

It is today, in fact, that the Tunis Stock Exchange hosted “Delice Danone” on the main official stock market. This new IPO, the fifth since the beginning of the year, was held at the seat of the Exchange in the presence of all market participants and media representatives.

The open price offer has been highly successful resulting in a demand for shares representing 15.5 times the offer, and a high number of subscribers reaching 15,737. Global and private investments have been subscribed with 32 and 91 investors, respectively.

Tunisia : Foreign currency reserves up to 131 days of imports