Lamia Ben Mahmoud: good results in 2014 and promising figures for 2015 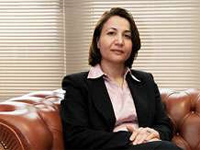 Lamia Ben Mahmoud, CEO of Tunisian re-insurance company, Tunis-Re gave Africanmanager an exclusive interview in which she talked about the situation of the company to December 31, 2014, the company’s achievements in early this year and its development prospects.

In this interview, the CEO of Tunis-Re also spoke of her appointment as head of the African Insurance Organisation (AIO).

2014 was a very good year for the company, despite the difficult situation nationally, regionally and internationally.

The year 2014 was also a very good year in terms of the company’s positioning in relation to its main competitors.

In 2014, the company was able to achieve an important evolution in terms of its turnover (around 13.7%), exceeding the target set for that year. This increase comes in the rate of 62% in the conventional scheme and 38% in the optional, i.e. an achievement rate of 106% compared to objectives.

What are the main achievements of the company during this year?

During the same year, Tunis-Re was able to increase its technical provisions under outstanding claims by 0.8% and consolidate retention by two points, up from 49.9% in 2013 to 52.2% in 2014.

In 2014, the company was also able to maintain its technical and financial solvency rating at B + (Good) with a stable outlook.

The year 2015 looks good and promising for the company. On May 31this year, the company was able to achieve 74% of the target set for this year and achieve a higher turnover by 6%.

This has affected all areas and all business activities.

What are the company’s growth prospects for 2015?

The company expects 2015 to be better than 2014 and a turnover that exceeds 100 million dinars at the end of this year.

Regarding the forecast turnover for the period 2015/2018, the company expects an average annual increase of 5.8% to 113, 936 million dinars in 2018. This is a development that is in line with the average of the global reinsurance market in the last decade.

Regarding the overall outcome of Tunis-Re, it will increase, according to the company’s forecasts from 11.7 million dinars in 2014 to 25 MD at the end of the plan in 2018.

What are the projects planned by the company in the coming years?

Among the major projects of the company, there is international expansion, particularly in the African market.

Saharan Africa is our first target knowing that the company’s external sales come to the tune of 45% from Arab countries followed by Africa with a share of 25%.

Why the choice of Africa?

Africa appears today as a regional reference with the potential and growth prospects available to the continent. We are very interested in the African market especially as the company enjoys today a good reputation abroad.

Tunis-Re is a well-established company in Tunisia and well oriented to Africa and the African market has strong potential and attractive growth prospects.

Apart from Africa, are you targeting other destinations?

We aim to consolidate our position in the domestic market and increase the contribution of the company to the national economy.

How far the company’s capital increase operation has made progress, especially after the failure of the operation reserved for a strategic partner?

The capital increase of Tunis-Re closed on June 5 successfully.

The share capital of “Tunis Re” was brought from 75 MTD up to 100 million dinars by the issue and creation of 5,000,000 new shares of nominal 5D to be subscribed in cash at a price of 7,800D and released in full at the subscription.

This capital increase was planned in the company’s development plan for the years 2012/2016 and aims to consolidate the capital base of the company in order to expand the company’s subscription capacity and further diversify the activity of the company.

What are the main characteristics of the Tunisian insurance sector?

You were recently elected president of the OAA, can you tell us more?

Exactly, I was elected last May 27 president of the African Insurance Organisation (AIO) for a term of one year, after assuming last year the vice presidency of the organization.

This new appointment will certainly help the company to comfortably achieve its objectives especially in terms of outsourcing and development.

Tunisia: approved agricultural investments up 15.4% at end of March 2015

Tunisia: Inflation picks up again in August to 6.7%

Tunisia: social protests up in November