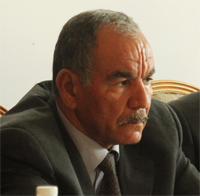 Following the outbreak of terrorist events in Tunisia, the military and security institutions have called on Tunisian lawmakers to activate, in the shortest possible time, the law against terrorism that has become a lever of great importance in the fight against terrorist groups.

In an interview with Africanmanager, Mokhtar Ben Nasr, retired Colonel Major and member of the Tunisian Centre for Global Security Studies, reviewed the gaps in the law and the strategies undertaken to guide the fight against terrorist threats.

What do you think of the new anti-terrorism bill?

Compared with the 2003 law, the anti-terrorism draft law is relevant. However, it includes several shortcomings. Security experts gathered recently for ten days to re-read this bill and noted many gaps. There is confusion in the definition of several concepts. For example, there is need to define in a clear and precise way legal terms and concepts that are the bases of the bill like “country,” “continental shelf” or “chemical crimes…” We have responded and we sent to Tunisia’s three leaders copies with correction of several concepts that were mentioned in an arbitrary manner in the new bill.

Many civil society activists fear the duplication of the 2003 law, what do you think?

We only demand the application of the law, the protection of the country, citizens and the Army and we are against a return to old practices by the former dictatorship. This new law should be consistent with international human rights standards on the right to a fair trial, and we refuse to see it used as an excuse to silence activists from the civil society and limit freedom of expression…

How can we fight against the inevitable spread of terrorism in Tunisia?

To fight against terrorism, we need to further review the security strategies and institutions in charge of the case should cooperate more in order to deal more effectively with terrorism.

The military provides continuous efforts to ensure the protection of citizens and seeks to cooperate with the security units to eradicate terrorism. Training sessions are always held to provide moral and psychological guidance to army staff and the goal is always to fit best with the methods used by the terrorists in their operations.

We have the tools (modern weapons, armored vehicles, sophisticated cameras …) needed to attack terrorist groups. Our fight against terrorism has not finished and we continue the fight to eradicate this nightmare.

I also want to recall that that the military, which sticks to its neutrality, refuses any politically-oriented intervention and opposes any attempt to influence its activities. It is convinced that its mission is to protect the country against any terrorist threat

Tunisia is highly threatened by terrorist operations, however, many Tunisians refuse to perform military service, what do you think?

It’s really disappointing. Every citizen has a duty to protect the country and to safeguard its independence, sovereignty and territorial integrity. We need to put in place more stringent and specific laws to encourage Tunisians to perform their duty, which is always an obligation and not a choice. Each year, the military needs about one hundred thousand participants to perform military service, but only 15 to 20 thousand people come to the service and it is not enough.

What is the role of the Tunisian Center for the Study of Global Security in the fight against terrorism?

The Tunisian Center for Global Security Studies is a non-profit organization and aims to develop strategic studies in conjunction with various national and international issues and the search for adequate solutions to security issues in the country. It starts from the fact that it is necessary to keep away from political wrangling and partisan leanings. This organization plays an important role in the civil society, concerned with security-related issues.

But despite its contribution to the country, this structure suffers from financial problems and receives no government assistance and does not even have a seat.

Tunisia: tourism revenues down 64% until December 20