HomeFeatured NewsTunisia: Sousse is filled up, more than 111,000 Algerian tourists in...
Featured News

Tunisia: Sousse is filled up, more than 111,000 Algerian tourists in August 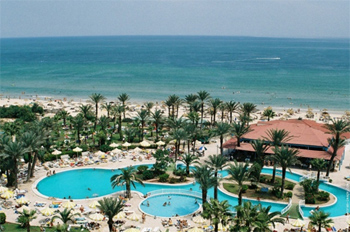 Tunisia remains the favorite destination of Algerian tourists and the Algerian neighbor has been for many years the biggest market for Tunisian tourism.

This influx is mainly due to cultural similarities between the two peoples, non-imposition of visa, affordable prices and proximity to boundaries.

According to recent data provided by the Regional Directorate of Tourism in Sousse, hotels in the city of Sousse, Chott Meriem and Kantaoui, welcomed 111,000 tourists in the first 20 days of August 2014. These hotels have recorded a growth of 13% over the past year.

Regarding the number of overnight stays, they reached 752,000, posting a growth of 8% compared to the same period last year.

The same source notes that the region of Sousse remains the favorite destination of Algerian tourists, whose number reached during the first 20 days of the month 13,900.

Nabeul is clearly in the same boat. The regional tourism office of the governorate announced that tourist units in the area are booked due to the influx of a large number of Algerian tourists.

47.1% of Algerians prefer to spend their holidays in Tunisia

According to a survey conducted in July 2014 by the Algerian Institute “Uqbah Com Institute” on vacation of Algerians, 47.1% of respondents said they plan to spend their holidays in Tunisia, followed distantly by France (14.2%), Turkey (12.9%), Spain (10.3%) and Morocco (4.5%). The share of other countries is insignificant…

Note that this survey covered 2,456 people and several aspects of the issue were discussed. These include the demographic profile of those who intend to go or not to go on vacation, favorite destinations, countries where they have chosen to spend their holidays abroad, room types chosen and transportation as well as preferred formulas of accommodation.

It must be said that Tunisia is now in better condition to develop in the medium term a more diverse tourism offer that would attract not only Algerian tourists but also tourists of different nationalities. It’s time to innovate, think outside the well-trodden paths, to get away from its comfort zone, but the country’s economic future and the success of the Revolution partly depend on it.

It should be recalled that the Tunisian National Tourist Office has announced repeatedly that it hopes to reach or even exceed the threshold of one million Algerian tourists in Tunisia by the end of 2014. It is in this context that different stakeholders of the sector are called to seek urgent solutions to save the season both the summer and winter seasons.