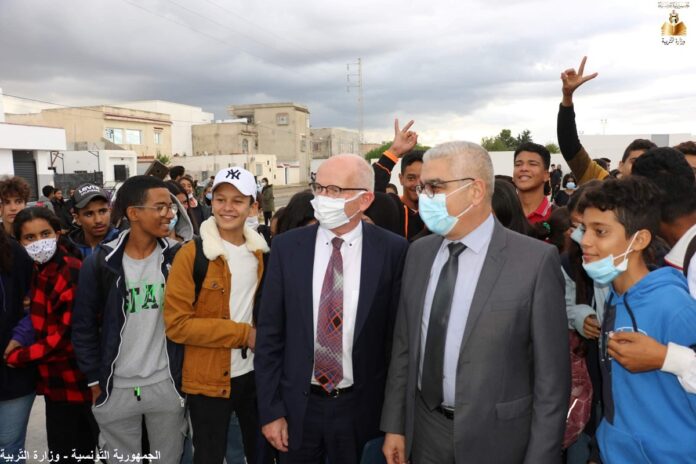 Minister of Education Fathi Slaouti, on Wednesday, inaugurated a new high school built in Mornaguia, governorate of Manouba, under the programme to modernise educational institutions in Tunisia.

That programme is funded in partnership with the European Investment Bank and the German Development Bank.

This is the last achievement among 11 institutions whose work has been completed on a total of 59 new schools scheduled under the first tranche of this programme, said the Minister of Education.

Twenty-eight other institutions are being built in different regions of the country, the Minister told reporters.

The second tranche of the project includes the renovation, maintenance and development of 420 educational institutions and another component involving equipping 40 schools.

Negotiations are underway with the same partners to finance a project to develop elementary schools whose number is estimated at 4500 by introducing new creations, maintenance work, development of basic infrastructure, said Slaouti.

The Ministry has taken charge of 400 educational institutions to resolve the deficiencies and problems found in basic infrastructure, besides settling the water supply problem, said the Minister of Education.

Ambassador of the European Union in Tunisia Marcus Cornaro, who attended the inauguration alongside the German Ambassador to Tunisia Peter Prugel, welcomed the experience of modernisation of educational institutions and the fruitful partnership.

The new high school in El Mornaguia in the governorate of Manouba is a prototype of sustainable construction by respecting sustainable development, renewable energy and water saving standards, thus influencing the educational environment and the relationship between students and the teaching staff, he pointed out.

The capacity of the new high school is estimated at 800 students and has classrooms, a teacher’s room, a cultural space, a sports room, two areas of collective sport.

The programme also provides for the training of more than 400 educational executives, the mobilisation of educational equipment, computers, the acquisition of cars for the local education commission and the central directorate of the Ministry of Education.

Tunisia: EU launches online consultation on its relationship with Tunisia