HomeInterviewOlfa Youssef to AfricanManager: ''One would believe in Santa Claus more than...
Interview

Olfa Youssef to AfricanManager: ”One would believe in Santa Claus more than in a government of losers” 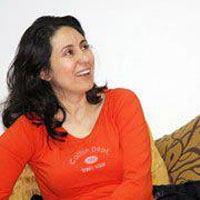 Olfa Youssef, Tunisian writer and academic specializing in linguistics, psychoanalysis and applied Islamic studies gave to African manager an exclusive interview in which she said that the government has failed in its mission since it has not been able to ensure the safety of the country. She also stressed that the Troika has become a symbol of failure.

Olfa Youssef also said that many public figures are already insecure and expects other crimes and assassinations.

“The Troika has become a symbol of failure.” “I predict other crimes, and I hope I’m wrong”

What do you think of the political situation of the country?

The current political situation is characterized by a desired invisibility, the absence of a date for elections as well as the fragility of the democratic transition in Tunisia. This invisibility has strongly influenced the country’s social situation. The society is now increasingly plagued by violence in the absence of law enforcement.

What is worst is that the law is sometimes applied on some sides and ignored for others, thus establishing the policy of “double standards.” With these social and political failures, it is almost inevitable that the economy follows the same pace. Our economy, according to leading experts is going through one of the darkest periods. Tunisians are also faced with several challenges such as soaring prices and inflation which has reached dizzying rates. The Troika has become the trademark of failure which it should claim indeed.

Among your famous quotes that have circulated on face book, “we have a government of losers and a country that is heading towards bankruptcy,” why?

The intentions and capabilities of a government made evident for more than one year, including four months in political and ethical illegitimacy, are not hidden. When it comes to incompetence, we have seen more than an example of it, sometimes hilarious and daunting, so forgive me if I do not see how a minister of the Interior politically responsible for a political assassination, and who, in any democratic country that respects its institutions, would have resigned, was promoted to Prime Minister. Some believe in a promising future with these losers, they would have better believe in Santa Claus, at least, he brings gifts.

This is the first time in my life, I join a political party. Time is no longer for activism by word though it remains very important, but time is also for political actions, such as contact with the poorest and fieldwork. I chose Nidaa Tounes because the ideological premises of the party are partly similar to mine’s. I have never been a radical leftist and I respect my leftist friends. I’ve always been in the reform of Islamic thought and the cultural tradition of the great Muslim and Tunisian reformers and this since 1997, when I published my first book on Islam. I believe in the market economy, with state regulation. I am against unbridled capitalism and I believe that communism is not far from being a kind of fundamentalism. I have been for the right balance long ago.

You constantly pester supporters of Ennahdha, why, according to you?

You must ask them the question. But more seriously, I think I upset them because first, I am a woman who speaks in public, and you know their problems with women freed from their yoke, then I am interested, as many other women are, in Koran exegesis and Islamic thought, which has long been reserved to men. I claim, therefore, to have some knowledge of their symbolic capital from which they want to exclude others, to make it a political value.

Finally, I have managed, thanks God, to find a way to the heart and mind of a certain segment of society, by using modern means of communications such as Facebook. For less than that, they would hate me, there, some dream to lynch me. They are saying that.

According to some sources, your name is on the list of people to be killed. Do you not fear for your safety?

Yes I do. A lot of public figures already fear for my safety. But I think all Tunisians are insecure, and that’s what concerns me the most. I predicted other crimes, and I hope I’m wrong. But as a religious person, I believe that life and death depend only on God. It is He alone who decides, so why worry too much about what is beyond us. I quote, on this occasion, a friend who was threatened by a Nahdhaoui (member of Ennahdha), who told him that his name was on the list of people threatened with death.

Samia Abbou accused Beji Caid Essebsi of being behind the assassination of Chokri Belaid. What do you think?

I will not stoop to the level of Samia Abbou, this alleged “lawyer,” who knows human rights but accuses, without proof, a man with murder. No, I’m not accusing anyone, but, I said loud and clear that the Troika is responsible for this crime by its indifference and incompetence.

According to international standards, a government unable to establish security has failed in its mission. Indeed, Jebali had understood it, although I do not judge intentions. So let us make a difference between “being guilty” and “being responsible.” This government and this “president” who had heard about threats against Belaid in mosques which have become places of violence and calls on belligerent face book pages has not lifted a finger to defend the late martyr Belaid and all those at risk. And verbal and physical violence continues to rage facing the deafening silence of the authorities.

Tunisia: Industrial production down 1.1% at end-July