Rached Ghannouchi calls upon Tunisians to stand together in fighting terrorism 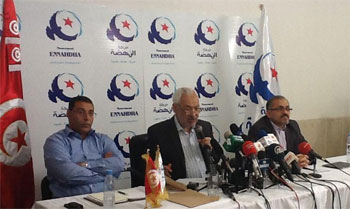 After long days of silence and ignorance of the climate in the country, ruling party “Ennahdha,” has vehemently condemned the Mount Chaambi events.

At a press briefing held at the Ettharir neighborhood, Rached Ghannouchi, President of the movement singled out the resort by “young offenders” to violence and the use of weapons during these events by threatening the security of the country and the objectives of the Revolution.

These young terrorists do not have an Islamic culture and must be eradicated, says Islamist leader, thus excluding any dialogue with them and stating that “Tunisia is not a land of terrorism, and we will not allow anyone to threaten the safety of Tunisians.” He added: “We are at war against terrorism. This is the time of clearing and Tunisians must unite and stand as one to fight the impending danger, which is not new, since Tunisia had faced terrorism under Ben Ali. We may cite as an example the events of Soliman.”

Speaking of Jihad, Ghannouchi pointed out that Tunisia is a Muslim country and there is no place for terrorism. However, the Sheikh did not fail to express the solidarity of his movement with non-violent Salafis, saying “Ennahdha” is not at war against “the latter who are part of the Tunisians with whom we should engage in dialogue.”

Stability is the responsibility of all

The Islamist leader emphasized the need for the mobilization of the various components of the civil society in order to preserve stability and achieve the overall restructuring. Something that can be done only through the activation of development programs and improving the social climate, marked at the moment by the multiplication of sit-ins affecting the Tunisian economy.

The National Constituent Assembly (NCA) is now called to facilitate the task of the government especially with regard to the problems faced. We are far from the goals assigned since we have realized only 4% of planned projects, he noted.

Indeed, poverty is the main cause of the rise of the phenomenon of extremist Salafism.

It is a strategic approach, he said, to move towards the organization of free and fair elections accepted by Tunisians which will crown the transition process.

In this context, Rached Ghannouchi called on the National Constituent Assembly to complete as soon as possible the drafting of the Constitution and of the electoral law.

On the other hand, he said that Tunisia, in the current context, needs a coalition to address these challenges. According to him, legitimacy alone is insufficient to achieve the transitional process, indicating that the country should be governed and protected by the legitimacy, but also by the coalition.

Hence the crucial role of the national dialogue initiative whose second phase will be led by the Tunisian General Labor Union (UGTT).

Samsung S5 unveiled at the MWC in Barcelona, Spain