Revival of economy and investment promotion, new motto of Medindustrie 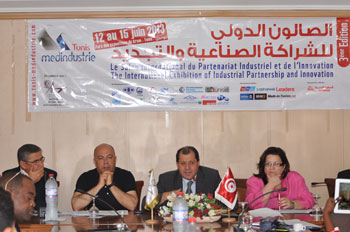 Two years after the Revolution, the cost of the fall of the dictatorship begins to weigh heavily not only on the socio-political life, but also on the external environment of the country with an image that continues to deteriorate abroad.

It is a high cost that exceeds what was estimated with the resurgence of violence and terrorism in particular. This has severely damaged the image of the Tunisian site among

its partners, but also among investors wishing to set up in the country, considered as a link between the north and south of the Mediterranean area.

Today, all economic actors are mobilizing by increasing initiatives so that the economic machine restarts in order to meet the demands of the people and improve the image of Tunisia, already undermined by ratings agencies.

In this apparent morose climate, support structures have decided to mobilize and move to the front line to boost the local economy by strengthening investment which remains low and below the estimates.

“Working For the Future” synergy between investment and partnerships

This is the case of the Chamber of Commerce and Industry of Tunis (CCIT) which has sought, through various means, to contribute more to this endeavor considered difficult. The methods are different, with one goal: boosting regional development and generating new employment positions.

As a solution, the CCIT has chosen to organize an exhibition to meet this challenge. It is “Tunis Medindustrie” a major event whose motto is “Working for the Future.”

Preparations are well underway for this third edition to be held from June 12 to 15, 2013 at the Kram Exhibition Park, bringing together professionals from the electrical, electronic, mechanical, metal, plastic and automotive sectors.

According to Mounir Mouakher, President of the Chamber of Commerce and Industry of Tunis, the organization of this exhibition comes exactly at the right time since it seeks to support the steadily deteriorating economic activity, on the one hand and to promote the image of the post-revolutionary Tunisia, strongly affected by the incidents perpetrated recently, on the other hand.

At a press briefing on Thursday, 6 June, the President of the Chamber noted that “Tunis Medindustrie” will play a key role in this process by bringing together the different economic players to exchange views and develop new win-win partnerships. Similarly, prospects for future collaboration will be offered to Tunisian companies operating in the industry sector with their counterparts from other countries.

This is a strategic move to ensure that economic businesses fully play their role in the coming period to promote investment, export and also curb unemployment, a major concern that can be met through the introduction of a new generation of companies, supervised by support structures for young entrepreneurs.

”Medindustrie,” which will be inaugurated by Prime Minister Ali Larayedh, will be attended by 213 exhibitors including 150 Tunisian.

The program includes panels and technical workshops to discuss several areas, namely financial support mechanisms as a tool for development and renewable energy: industry of the future in Tunisia.

An area of 30 tables is reserved for B2B meetings to be organized in partnership with “Made in Tunisia.”