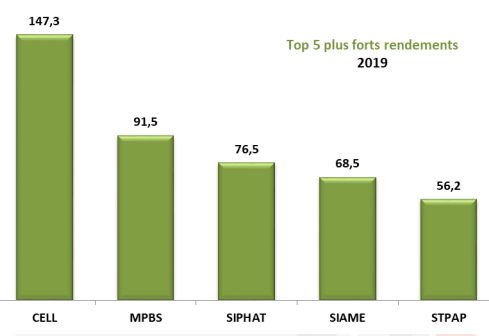 These involved hazards of all kinds, especially at the national level, which have abruptly affected the volume of trading and the general trend of the indices.

Stock market activity was marked in 2019 by a very difficult national situation for investors disoriented by the lack of visibility and the climate of wait-and-see attitude, favored by the elections, as well as by the upward movement of rates and consequently arbitration of investors in favor of monetary investments.

Despite this situation, the overall performance of listed companies declined only moderately, with half-yearly results down 6.2%.

In 2019, the total amount of issues carried out by listed companies and authorized by the Financial Market Council (end of November 2019) reached 885 MTND for 26 transactions.

This number is divided between 8 bond issues for a total amount of 280 MTND, a Bond issued according to the principles of Islamic finance and a Participating Bond for an amount of 25 MTND, and 16 capital increases for 580 MTND.

During the second half of the year, Tunindex suffered mainly from the effects of political tensions on the occasion of two legislative and presidential elections.

Its annual return closed 2019 with a loss of 2.06%. During the year 2019, the national currency appreciated against the two main foreign currencies, namely the Euro and the US Dollar.

As a result, the Tunindex, estimated in Dollars, recorded an increase of 4.15% and estimated in Euros, it appreciated by 6.98%.

Decrease in all sector indices

The annual balance sheet of the sector indices, published by the Stock Exchange is in red. Of the 13 indices (sectors and sub-sectors), only four indices achieved a positive performance in 2019.

For the indices of the sub-sectors, the “Insurance” index was the best performer with an increase of 7.88% and the “Household and Personal Care Products” index rose by 5.19%.

With the exception of the “Base Materials” index, which achieved a gain of 1.39%, all the other super-sector indices posted negative performances.

The “Industries” index recorded the largest decline, i.e. a drop of 14.83%, followed by the “Consumer Services” index with a decrease of 14.69% and the “Financial Companies” index with a slight drop of 0.37%.

Market capitalization down by 656 MTND

This decline is mainly due to a general fall in prices on the Tunis market, but also to the delisting of the company “Elbène Industrie” following a request from that company.

Financial Companies still dominate the market capitalization with a share of 50.7%, followed by Consumer Goods and Industry which monopolize respectively 35.6% and 7.1%.

Decrease in trading volume in the 2 compartments

The volumes traded on the Stock Exchange Listing took up 47.2% of the overall trading volume, 7% on the Off-exchange and 46.8% for registrations and declarations.

Exchanges of equity securities accounted for 84% of the volume of trading on the stock exchange for an amount of 1,329 MTND against 1,899 MTND in 2018.