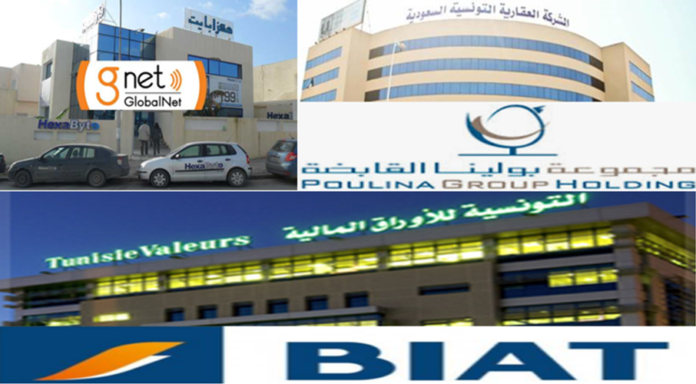 The year 2020 for the Tunisian Stock Exchange (BVMT), was characterized by the multiplicity of capital movements, takeover bids and delisting.

The first operation of the year was the acquisition by BIAT of a majority block (50.5%) in the capital of Tunisie Valeurs (TV).

This transaction triggered a mandatory takeover bid on the remaining shares bringing the bank’s stake to more than 98% of Tunisie Valeurs.

Completed last April, the takeover bid was followed by a takeover bid at the end of which the company was delisted and removed from the list of companies making public offerings.

The merger between BIAT and Tunisie Valeurs is part of a logic of synergies between the banking and financial market businesses to consolidate the positioning of each player on its market.

Another capital-intensive operation was carried out in 2020. It was the acquisition of a majority stake (42.3%) in the capital of Hexabyte by 3S, the holding company that owns the internet service provider GlobalNet, following the exit of the founding shareholder, Naceur Hidoussi from the capital.

The transaction, which valued Hexabyte at 15.7 MD, immediately triggered a takeover bid for the rest of the capital.

After the takeover bid, Hexabyte’s new reference shareholder delisted the company. The acquisition of Hexabyte by 3S is part of a movement of consolidation in the ISP sector (GlobalNet with a 15% market share and Hexabyte with a 6% market share) to resist the major telecom operators and TopNet, the leader in the sector which today holds a 65% market share.

After having crossed the threshold of 40% of the company’s capital, the Poulina Group was subjected to a compulsory Takeover Bid targeting the rest of the real estate developer’s capital, at the price of 2.360 TND per share, which values SITS at 36.8 MDT.

This operation could put an end to the company’s governance problems that have occurred over the last few years.

After Tunisie Valeurs and Hexabyte, the distributor of spare parts for cars and trucks STEQ, plans to withdraw from the stock exchange. After reaching a 97% stake in the capital, the AREM Group launched a buyout offer on the company at the end of 2020.

The capital movements affecting Tunisie Valeurs, Hexabyte and SITS may have reduced the number of listed companies to 80 as of December 31, 2020, but they illustrate the role of the stock exchange as a springboard for merger and acquisition operations.

On the bond segment, the market saw a renewed vigor of issues especially during the second half of the year.

Ten bond issues through public offerings have been closed since the beginning of the year for a total amount of 380 MD (compared to six issues for 188.8MD in 2019).

The asset management industry saw the entry into activity of 3 mutual funds (3 FCPR). However, the number of vehicles in operation remained stable at 119.

The net assets of collective savings have clearly recovered (+27.4% to 4.7 billion dinars, a net collection of 1 billion dinars).

The capping of interest rates on term accounts and other certificates of deposit since April 2020 at MMR + 1% and the increase in the rate of withholding tax on term deposits from 20% to 35%* have directed savings towards mutual funds, and therefore towards the bond market.